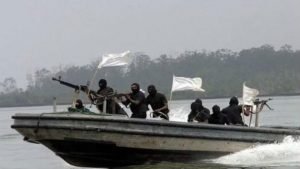 Port Harcourt — As a result of increasing insecurity on the waterways in Rivers State, passengers and boat drivers have deserted the Sea piracy: passengers desert waterways in Rivers, over fear of being attacked and kidnapped by sea pirates.
Before now, more than 30 boats were plying to and fro Bonny Island from Port Harcourt on a daily basis, however, only three boats now ply that route due to constant attacks and abduction of passengers and drivers by pirates.
In February, this year, no fewer than 15 passengers and boat operators were kidnapped by suspected sea pirates, although they later regained freedom through the efforts of the Nigerian Navy and local vigilantes.
Water travellers say they are now plying alternative routes, over fear of being robbed or kidnapped on the sea.
Speaking on the development, the Maritime Workers Union of Nigeria has tasked the Nigerian Navy, marine police and other security agencies to double their efforts in tackling sea pirates on the waterways in Rivers State.
Chairman of MWUN in Rivers State, Jonah Jumbo, appealed to security agencies to embark on regular patrol of the creeks and water channels, to curb all forms of criminality  on the waterways.
Jumbo admonished boat operators and owners to adhere to the rules and regulations guiding the movement of boats and passengers, especially at night.
He also advised boat drivers and passengers to always put on their life jackets before embarking on water journey.