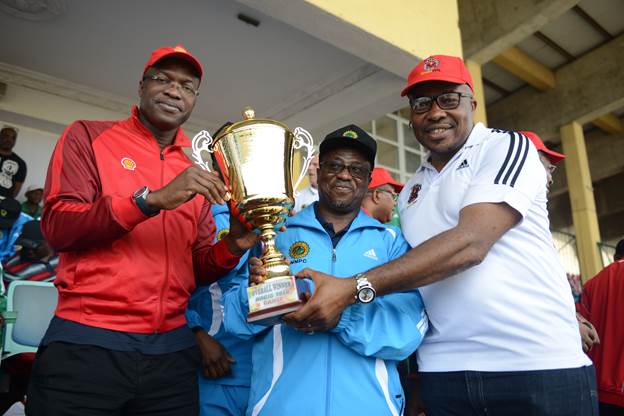 27 February 2018, Sweetcrude, Lagos — For the third time running, Shell has won the Nigeria Oil and Gas Industry Games (NOGIG), posting a commanding victory streak in the history of the 30-year old triennial competition. At the end of the week-long NOGIG 2018 in Lagos, Team Shell topped the medal table with 11 gold, 12 silver and 11 bronze, leaving the Nigerian National Petroleum Corporation (NNPC) and Chevron in second and third places respectively.

“Team Shell’s record win is well-deserved,” said Osagie Okunbor, Managing Director, Shell Petroleum Development Company of Nigeria (SPDC) Ltd and Country Chair, Shell Companies in Nigeria, while reflecting on the performance of the contingent. “The games present a good opportunity for all of us in the oil and gas industry in Nigeria to be physically active and network in an atmosphere of healthy rivalry, and we wish to commend Team Shell for the hard work and commitment which have earned them a top place at the medal table for three consecutive years.”

Speaking at the closing ceremony, the NNPC GMD, Dr Maikanti Baru, chief host of the games, commended the athletes for competing keenly and fairly, and hoped that the quality of the games would continue to improve in the coming years. Both the Minister of State for Petroleum, Dr Ibe Kachikwu and the Lagos State Governor, Mr Ambode Akinwunmi echoed the same sentiments in the goodwill messages they sent to the ceremony. General Manager, External Relations, Igo Weli represented Shell at the event and received the winner’s trophy from the NNPC GMD amid cheers and jubilation.

Manager Team Shell, Alex Onumbu who is the also the Vice Chairman of the local organising committee of the games, thanked the management of Shell companies in Nigeria for their support and the athletes who made Shell proud. He said: “The amount of hard work and discipline that underpin our participation and victory can only be imagined. We want to pay tribute to our athletes, who in addition to their normal work, took the time and pains to train, compete and win. And of course, we also own a huge debt of gratitude to our management, because without their untiring support, we would have gone nowhere. This record victory is not just for Team Shell – it is for all of us!”

NOGIG began in 1986 as a squash tournament in Eket, Akwa Ibom State. The 18th edition of the games is expected to hold in 2020.