Lagos — Exports from the Shell Petroleum Development Company, SPDC, Forcados oil terminal in Nigeria resumed after a 10-week interruption, offering a boost to the government amid tumbling crude production this year.

Shipments restarted following the completion of repair work at the coastal facility in the oil-rich Delta state, a spokesman for Shell’s Nigerian unit said in a statement on Thursday night. The company introduced the suspension on Aug. 5 due to problems with a sub-sea hose. 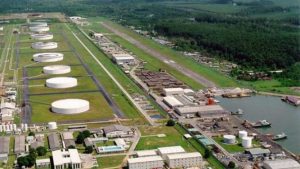 Nigeria’s oil output has been declining steadily since the first quarter of 2020, when it was roughly twice as much as it was last month. The West African country produced a daily average of 1.14 million barrels of crude oil and condensate -– a light hydrocarbon –- in September, according to government data.

Much of the slump can be attributed to production of three major export grades -– Bonny, Brass and Forcados — that has shriveled to a trickle in recent months. The government blames rampant theft on the pipelines that crisscross the Niger Delta for shutting down wells and killing off investment.

The resumption of operations at the Forcados terminal and the 180,000 barrel per day Trans-Niger Pipeline will help add half a million barrels to daily output by the end of November, the Nigerian National Petroleum Co.’s chief executive, Mele Kyari, said in an interview earlier this month.

During the first half of the year, Nigeria produced about 230,000 barrels a day of Forcados grade oil, according to government data.