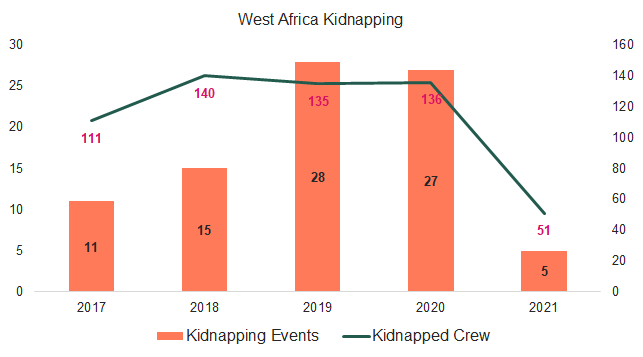 The DBP is highly anticipated as it represents a comprehensive enhancement of Nigeria’s maritime security capabilities, which is intended to curb piracy, robbery, kidnapping, oil theft, smuggling, and illegal trafficking of drugs and persons within its territorial waters and exclusive economic zone.

Whilst the aims of the DBP are multifaceted, the primacy of effort is without question the fight against piracy and the delivery of enhanced safety of life at sea.

Its launch will see Nigeria consolidate its role as the leading force in fighting piracy offshore throughout the region. However, it comes at a time when the EU has recently launched its Coordinated Maritime Presence initiative which is soon to be expanded with a Danish frigate.

This indicates that extra-territorial states with interests in the region are beginning to shoulder some of the responsibility due to a shortfall in collective responsibility of Gulf of Guinea littoral states.

With mounting international pressure on Nigeria and the wider Gulf of Guinea states to facilitate greater security within the maritime domain, it is vital that projects like the DBP are evaluated against their potential for success as a framework contributing to wider regional security rather than at a merely national level.

Further still, it is vital to look at the evolution of risk within the Gulf of Guinea to understand how effective such a framework may be in delivering long term sustainable security to mariners throughout the region.

The DBP was first initiated in 2017 by the Minister of Transportation, Rotimi Amaechi.

One of the first steps involved the Nigerian Government approving a maritime security contract with Israeli firm HLSI Security Systems and Technologies Limited for asset procurement and leasing. In 2020, Amaechi requested further funds to hire fast intercept vessels for one year, claiming the $195 million already approved for the same purpose had been put on hold due to COVID-19.

In total, Nigeria has allocated a tenth of its defence budget to the DBP and is expected to deploy an increased range of assets to tackle maritime insecurity including two Special Mission Vessels, seventeen Fast Interceptor Boats, two
Special Mission Aircraft, three helicopters, four unmanned aerial vehicles and sixteen armoured vehicles. Furthermore, to bolster intelligence gathering and sharing efforts, a command, control, computer communication and information centre (C4i) has also been set up in Kirikiri, Lagos.

Against the backdrop of such a significant investment in infrastructure and capability, it is logical that at a rudimental level, key outputs from the DBP are likely to include increased monitoring and more frequent patrolling, allowing Nigeria to exert a greater operational footprint throughout its offshore domain.

Through its investment in a C4i centre it is likely that Nigeria will have greater capacity to develop a reactive posture in response to developing incidents and coordinate activity with neighbouring states.

Finally, through its political investment onshore it is likely in turn to result in a greater focus on maritime domain awareness and thus lead to a reduction in the ‘sea blindness’ that has hampered efforts to date.

Determining the success of the DBP in terms of improving maritime security within Nigerian waters, and indeed at a regional level, is however a more complex task than may first appear.

To effectively benchmark success, one must move beyond reductionist models that equate a decline in offshore incidents in the Nigerian TTW and EEZ as being a de facto indicator of successful outcomes resulting from the DBP.

Well established trends throughout the Gulf of Guinea clearly show the fluid and dynamic nature of piracy. This can be seen in terms of pirates’ ability to select areas of operations based on a knowledge of the current limitations of the in-place security architecture, and their ability to mount increasingly complex operations within areas far removed from their centre of gravity. Indeed, further evidence indicates that whilst the majority of incidents now occur
beyond Nigerian waters, pirates themselves continue to originate almost exclusively from within Nigeria.

For the DBP to be able to claim success, Nigeria must achieve more than simply driving piracy into neighbouring waters, it must ensure that the current areas of the southern Niger Delta that are allowing Nigerian pirates the freedom of movement to mount and sustain complex kidnap for ransom operations are themselves secured and further still, the conditions within those areas that drive individuals towards piracy are addressed accordingly.

Whilst any attempts to improve maritime security offshore Nigeria is welcome, it is also the case that the largely military approach to counter-piracy that dominates much of the DBP, risks ignoring the complex interrelationship of socio-economic and governmental factors that drive piracy and maritime crime.

Hence why the conventional wisdom in counter-piracy discourse states that the roots of piracy should ultimately be addressed onshore. Land-based counterpiracy approaches can involve programmes which focus on capacity building for law enforcement and policing, or a development model, focussing on preventive programs or alternative livelihood
projects.

WHAT’S NEXT?
By implementing the DBP, Nigeria should be commended for taking such a considerable step towards safeguarding its offshore domain, however real success in addressing piracy throughout the Gulf of Guinea will likely only be realised when littoral states effectively and collectively respond to the onshore and offshore drivers of piracy, whilst
strengthening regional frameworks and providing a system of collectivised security.

Until such time, national projects occurring in isolation will only seek to drive piracy elsewhere throughout the Gulf of Guinea and fail to deliver the required safety of life at sea. Even with the implementation of the DBP, regional cooperation with frameworks such as the GOG-MCF/SHADE and ECOWAS, remain necessary. Without this cooperation, pooling of resources and consideration of how regional responses might be harnessed to promote region-wide, land-based counter-piracy initiatives, piracy will continue to plague the Gulf of Guinea.

Large scale projects with considerable military hardware go a long way to addressing the resource scarcity that have thus far undercut offshore counter piracy efforts, however without a mechanism whereby such assets are used to regional effect and in conjunction with a clear strategy for addressing the issue of piratical freedom of movement within coastal areas, the issue is likely to continue.