Dana, Cameroon — Souloukna Mourga plodded through his flooded millet and cotton field in northern Cameroon and uprooted soggy stems that had a few bolls on them. All six hectares of mostly dead crops were under water.

The 50-year-old father of 12 is one of an estimated 4 million people, many of them small subsistence farmers, in over a dozen countries in West and Central Africa that have seen their crops decimated by unusually heavy flooding. 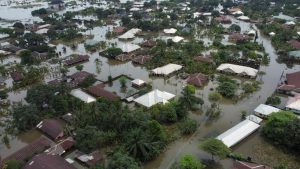 The floods have destroyed harvest for this season, while nearly 1 million hectares of farmland across the region remain under water, with soil nutrients being washed away and setting the scene for an even worse crop production next season.

Around Mourga’s farm in Dana village on the floodplain of the Logone River bordering Cameroon and Chad, hundreds of hectares of crops and dotted huts in hamlets remain under water.

“I have nothing left. We are facing famine. I have two wives and 12 children. The water has taken everything,” Mourga said.

Some 300km (186 miles) north of Dana on the floodplain between the Logone and Chari Rivers in Chad, it took Bernadette Handing, 37, two hours in a canoe to reach her flooded millet farm in Kournari, south of the Chadian capital.

“What I was able to save from the farm cannot support our family for a month. What is certain, we will die of hunger in winter,” she said.

Before the floods, the West and Central Africa region was already facing a bleak food security situation, said Sib Ollo of the World Food Programme.

Prolonged drought last year, conflict in the Sahel region that has displaced nearly 8 million people, most of them farmers, the pandemic that had disrupted farming, and fallout from the Ukraine crisis which curbed fertilizer supplies to the region, meant crop output was going to be low.

“It is an unprecedented situation,” Ollo said. “This is a perfect storm of factors all playing and leading us towards a catastrophe, a major crisis.”

The number of people in food insecurity and needing aid in the region was over 40 million before the floods, said Kouacou Dominique Koffy, head of the West Africa emergency and resilience team for the Food and Agriculture Organisation.

Koffy said 80% of those recently displaced were agro-pastoral farmers and it would take time for them to return, and the water to recede, before they could resume farming.

NEXT SEASON
In Nigeria, floods have destroyed more than 570,000 hectares of farmland, Sadiya Umar Farouq, minister of humanitarian affairs and disaster management said.

In the northeastern and middle belt states, where most of Nigeria’s food is grown, crops such as rice, maize and small grains are lost.

Edwin Chigozie Uche, president of Nigeria’s Maize Growers and Processors Association said preliminary reports showed that as much as 30% of the maize crop in the two regions could have been lost to floods, warning of possible food shortages.

“We have started taking soil samples in areas where floods have receded to check the level of nutrients. It will take some time for farmers to get back to farming,” Uche said.

Goni Alhaji Adam, chairman of Associations of Sorghum Producers, Processors and Marketing for the northeastern Borno state, said the flooding was the worst he had seen in two decades.

“We are very worried about farming next year due to the devastating floods. The possibility of not being able to farm is very high, because the topmost layer of the soil, which consists of high nutrients has been washed away, leaving the soil dead”.

Many are small scale farmers that can’t afford soil fertility tests and other farm management methods and will not be able to farm next year without support, but even if they get the support, the fear is that this may not be enough, he said.