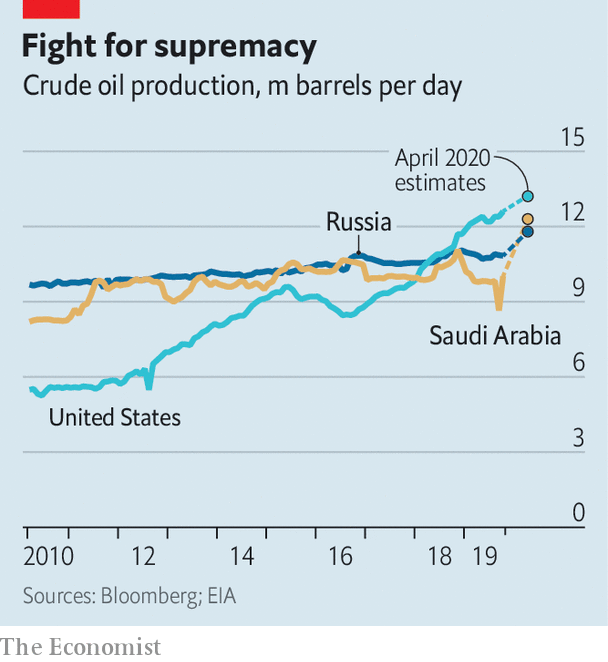 WASHINGTON — With Saudi Arabia and Russia agreeing on the contours of an unprecedented plan to slash crude output, President Donald Trump is on the verge of getting the global oil deal he wanted — without taking steps to ratchet down U.S. production.

The tentative agreement — which would be the largest-ever oil output cut agreed on by OPEC+ ministers — is coming without the U.S. mandating curbs on its own crude production. And if Trump agreed to anything in phone calls with the Saudis and Russians in recent days, those deals haven’t been made public yet.

In other words, Trump may win a global oil agreement by letting the market work.

“The U.S. is already effectively cutting because we cut in response to market force,” said James Lucier, managing director of research firm Capital Alpha Partners LLC. “We’re not a state oil corporation; we’re not government-directed producers of oil. U.S. oil production has an automatic response to excess supply, which is to shut in” that production.

The Trump administration is likely to take that argument to a virtual meeting of Group of 20 energy ministers Friday, as non-OPEC countries face pressure to come up with another 5 million barrels per day in oil production cuts.

For more than a week, Trump has talked up the prospect of a Russia-Saudi agreement to reduce oil output by at least 10 million barrels per day. He resisted calls to force deep cuts in U.S. crude production in tandem with Middle East producers.

Instead, the president and top administration officials repeatedly made the case that the free market is already paring oil production in the U.S. — without the government lifting a finger.

“The cuts are automatic if you are a believer in markets,” Trump said Monday. The president doubled down on that free-market talk Wednesday night, on the eve of Thursday’s OPEC+ summit. U.S. oil production already has been “cut back automatically,” Trump told reporters.

Energy Secretary Dan Brouillette pushed that argument too, emphasizing that the global crude price collapse has already caused U.S. oil companies to idle rigs and curtail drilling. And the Energy Department offered numbers to prove its case. A short-term outlook released earlier this week underscored that 2 million barrels per day of oil production are already expected to be lost — without any government intervention.

Trump’s laissez-faire approach has been “an effective bargaining position,” Lucier said. If Russia and Saudi Arabia say they want the U.S. to cut output too, the U.S. can effectively counter we’re doing it already, and “you need to match us, rather than we need to match you.”