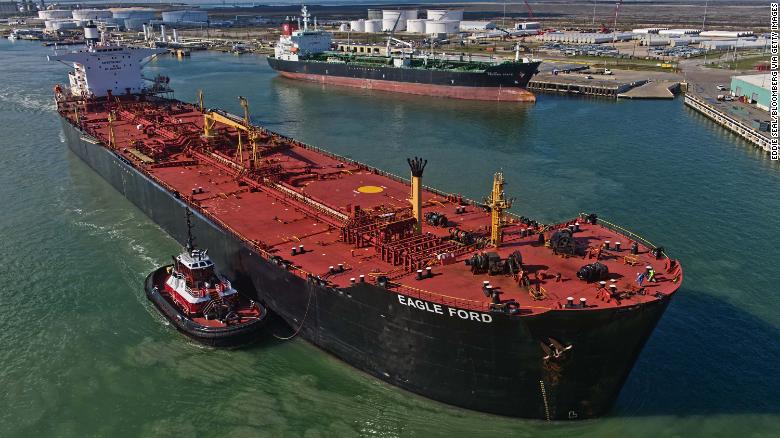 *The Eagle Ford crude oil tanker sails out of the the NuStar Energy dock at the Port of Corpus Christi in Corpus Christi, Texas, U.S., on Thursday, Jan. 7, 2016. Crude oil slid Thursday to the lowest level since December 2003 as turbulence in China, the worlds biggest energy consumer, prompted concerns about the strength of demand. Photographer: Eddie Seal/Bloomberg via Getty Images

Lagos — As tension in the Middle East Gulf eases and oil operations appears to be normal in recent weeks, the International Energy Agency, IEA, has said in June, the US briefly overtook Saudi Arabia and Russia as the world’s number one gross oil exporter.

The IEA in this month’s Oil Market Report, OMR released on Thursday, said the major political event that has taken place is a personnel change in Saudi Arabia with the appointment as energy minister of Prince Abdulaziz bin Salman, who is a well-known and experienced figure.

It said to date, support for the OPEC cut agreement rate has been high, but ahead of the meeting, data for August showed the compliance rate slipping to 116 percent.

In August, the Agency said three major countries Russia, Nigeria and Iraq, produced 0.6 mb/d more than their allocations. Saudi Arabia, on the other hand, produced 0.6 mb/d less than allowed, describing the move as “the lynchpin” of the whole deal.

“A reminder to the producers that competition for market share is getting tougher comes from preliminary data showing that in June the US momentarily overtook Saudi Arabia and Russia as the world’s number one gross oil exporter”, the report said.

The IEA said it maintained its growth estimate for 2019 at 1.1 mb/d, even though June data show that demand increased year-on-year by less than 0.2 mb/d.

For the second half of 2019, it retains the view that with oil prices currently about 20% lower than a year ago, that there will be support for consumers. Early data for July suggest that global demand grew by 1.3 mb/d year on year.

Its balances for 2H19 imply a stock draw of 0.8 mb/d, based on the assumption of flat OPEC production, stronger demand growth and weaker non-OPEC supply growth. “However, this is only really a breather: the 2H19 non-OPEC growth, although modest by recent standards at “only” 1.3 mb/d, is measured against the high base set by the enormous production surge seen this time last year”, it said.

So far in 2019, US crude oil production growth has stalled with June output only 45 kb/d higher than in December. Even so, output is still growing strongly on an annual basis, rising this year by 1.25 mb/d, with 1 mb/d of growth to come in 2020, it said.

In Norway, long-awaited projects are coming on stream earlier than expected and may ramp up to peak production ahead of schedule.
Oil production in Brazil is growing fast, reaching 3 mb/d in August, 0.4 mb/d higher than just two months earlier.

It said while the relentless stock builds we have seen since early 2018 have halted, however, this is temporary.

“Soon, the OPEC+ producers will once again see surging non-OPEC oil production with the implied market balance returning to a significant surplus and placing pressure on prices. The challenge of market management remains a daunting one well into 2020”.