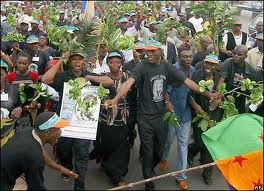 
29 July 2012, Sweetcrude, Port Harcourt – TIRED of waiting indefinitely on the federal government, the Ogonis have decided to occupy strategic economic facilities in their domain to press home their demand for the immediate implementation of the United Nations Environment Programme (UNEP) recommendations contained in a report released last year.

MOSOP’s provisional council chairman, Professor Ben Naanen, told disclosed that the Ogoni people had been mobilised to occupy key strategic economic installations located in four local government areas to protest the delay in the implementation of the report.

Similar mass action had forced Shell Petroleum Development Company (SPDC) to abandon its operations in Ogoni since 1993 to date.

Naanen said the Ogonis suspect the Federal government, which has failed to implement the report that was submitted to it since August 2011, might have set up HYPREP as a ploy to forestall the planned occupation of key installations in Ogoni and pending legal actions.

“We are not hiding our intention to occupy strategic economic installations to press the government to implement the recommendations of the UNEP report. Civil society organisations are also planning other actions. The government is aware of what is coming. There is no going back,” he said.

The MOSOP leader said during the planned occupation of Ogoni, there would be mass demonstration geared at disrupting economic activities, primarily to attract government’s attention to the yearnings of the people for a quick implementation of the report.

Naanen explained that the congress of Ogoni people met over the weekend to review the terse statement by Minister of Petroleum Resources, Diezani Alison-Madueke, announcing the setting up of HYPREP.

The minister had given the assurance that government would implement the recommendations in the report and investigate other hydrocarbon-impacted sites.

According to her, with the establishment of HYPREP, it is expected that all stakeholders, especially the impacted communities, would co-operate fully with Government by granting unfettered access to all impacted sites, to ensure complete success.
Naanen said Ogoni leadership are keenly awaiting details and clarification on HYPREP from the Federal Government.

UNEP, in its recommendation, said through a combination of approaches, individual contaminated land areas in Ogoniland could be cleaned up within five years, while the restoration of heavily-impacted mangrove stands and swamplands would take up to 30 years.

According to the report, all sources of ongoing contamination must be brought to an end before the clean-up of the creeks, sediments and mangroves can begin.

The report recommended the establishment of three new institutions in Nigeria to support a comprehensive environmental restoration exercise.

It recommended: “a proposed Ogoniland Environmental Restoration Authority would oversee implementation of the study’s recommendations and should be set up during a Transition Phase which UNEP suggests should begin as soon as possible.

The Authority’s activities should be funded by an Environmental Restoration Fund for Ogoniland, to be set up with an initial capital injection of US$1 billion contributed by the oil industry and the government, to cover the first five years of the clean-up project.”

UNEP also suggested the setting up of an Integrated Contaminated Soil Management Centre, to be built in Ogoniland and supported by potentially hundreds of mini treatment centres, would treat contaminated soil and provide hundreds of job opportunities.
This article was culled from the Guardian.