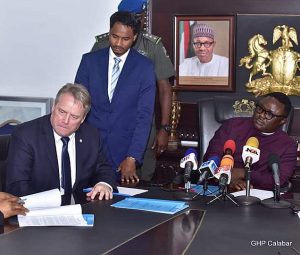 Port Harcourt — Bakassi Deep Seaport project is set to commence as Cross River State Government and an American firm, Terradyn Corporation, have signed a memorandum of understanding for financing of the port’s construction.

Governor Ayade, who described the port as a regional African port, and the deepest port in Africa, disclosed that the Republic of Chad was already disposed to having a bonded warehouse within the precinct of the Bakassi Deep Sea port.

He stressed that the Bakassi Deep Seaport was not only geared towards opening an alternative maritime corridor for Nigeria, which according to him, the country is in dire need of, but also designed to ease shipping and maritime difficulties of neighbouring landlocked African countries.

The governor said that the 274 kilometre superhighway linking Cross River to the Northern part of the country was conceived with the Bakassi Deep seaport in mind.

“Every Nigerian who loves this country knows that Nigeria is in desperate need of of an alternative maritime corridor to be able to provide the posterity agenda that we profess to our people.

“Today in Nigeria, we don’t have a port in the category of a deep seaport. The Bakassi Deep Seaport is the first Deep Seaport in Nigeria. It is a 20 metres draft port, one of the biggest port in Africa.”

He assured of his administration and Federal Government’s commitment to ensuring that the seaport project comes to fruition.

“It takes at least 15 years to obtain an OBC approval for the construction of a seaport but it took Cross River only three years. This shows strong will and commitment by the federal government to support the Bakassi Deep Seaport.