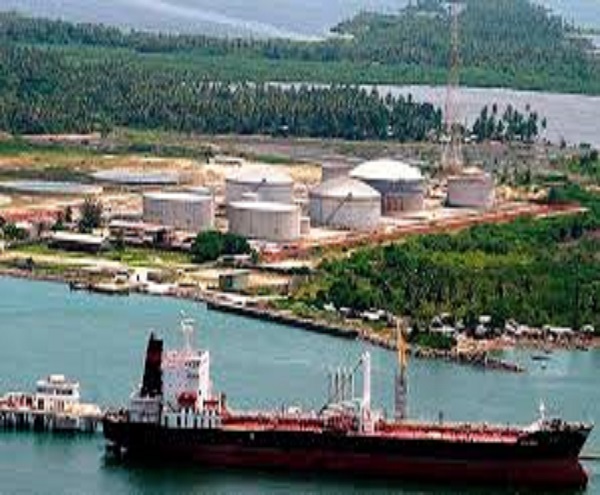 Lagos — ONE week after a supply vessel,‘M/T DEVISA’ ran into the rocky mules of the Escravos channel, the vessel is still stuck waiting to be rescued.

Sweetcrudereports investigation revealed the vessel also got damaged as the rock bore a hole through the body thereby allowing her to take in water.

Speaking on the development Managing Director of the Escravos Pilots Nigeria Limited, Captain Charlie Tobi, said the vessel will remain there until there is high tide.

Tobi explained that any attempt to forcefully move the vessel out of her present location will lead to more damage to both the mule and the vessel.

He stated: “It is only high tide that can make the vessel float from where she is currently stuck.”

Recall that about two weeks ago ‘M/T DEVISA’ ran into the breakwaters of the Escravos channels damaging the vessel and part of the mole.
According to Capt Tobi the vessel was traveling at night when the incident occurred adding that immediately after the accident the vessel began to take in water.

The incident, it was gathered, occurred on the 13th of May and part of the breakwater has submerged and called on the authorities to quickly rehabilitate it before more accidents occur on that axis of the port.

He explained that because the mole was submerged, the vessel did not know it was close to it and ran into the mole and got its bottom hull damaged.

The vessel, according to Captain Tobi, is currently sitting on the rocks of the mole.

Speaking in similar vein, former Senior Special Adviser to former President Goodluck Jonathan on maritime matters, Mr. Leke Oyewole, said the negligence on the part of government was responsible for the lapses being experienced in the Warri port.

Oyewole said the he cannot fathom any reason for the continued neglect of the breakwaters considering the volume of maritime activities going on in that area.

According to the former Presidential aide, said that the repairs of the mole on that channel were long overdue adding that the oil exploration activities should make the government repair the damaged moles.

He said: “The mole has collapsed for a long time and it ought to have been repaired, there is no exact reason why it has remained like that.

“The only thing that could come to anybody’s mind is probably negligence nothing more otherwise, the traffic on that channel may not be too heavy but then the oil exploration activities should also command that the place should be repaired.

“I think we need to re-focus and ensure that the place is repaired because it has claimed lives, for whatever reason, it should be repaired.

“It was a pothole on the road it would have repaired how much more a mole that has collapsed for years.”