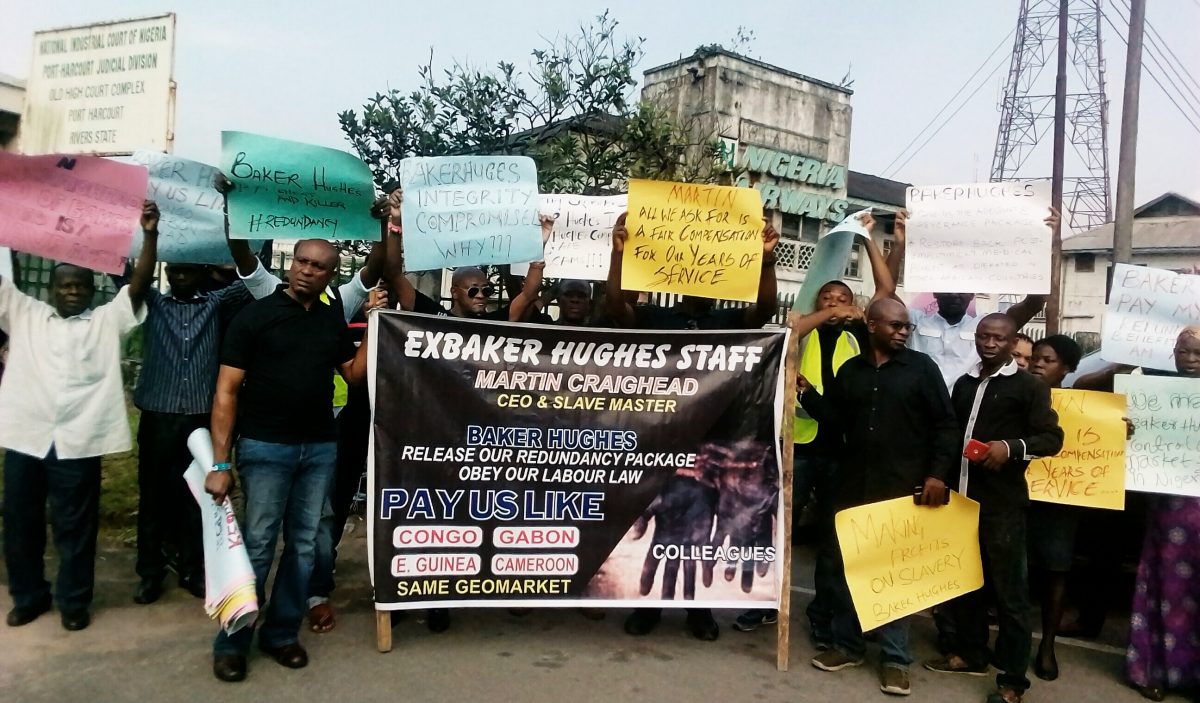 *300 ex-workers of Baker Hughes at one of their protest in front of NICN, Port Harcourt.

23 July 2018, Sweetcrude, Port Harcourt — 14 widows who lost their husbands in active service with Baker Hughes Company Nigeria Limited, without commensurate dead workers compensation package, have appealed to the President of the National Industrial Court of Nigeria, NICN, to accelerate hearing on the case between them and the company.

Recall that these widows together with 300 ex-workers of Baker Hughes have been in court since 2016 over their forceful disengagement by the company in 2015 without commensurate severance benefits, as was obtainable in other countries where the company was operating, such as Gabon, Cameroon, Congo etc.

The case which started in 2016 in Bayelsa State, was moved to Enugu State, before it was again moved to Port Harcourt in September 2017, has been on halt since the demise of the Presiding Judge, Justice Ibrahim Awwal, in February 2018, few days to his ruling on the case.

But Leader of the 14widows who spoke on behalf of others, Mrs. Okuru Monica Ateli, appealed to the NICN’s President to call for the speedy hearing on the case, in order to give them justice as life has not been easy for them since the demise of their husbands.

Ateli expressed worries over the continuous delay of the case since the demise of Justice Ibrahim Awwal in February, even as a new Judge has been assigned to the matter.

She explained that her husband who was in the drilling department of Baker Hughes got sick and died as a result of constant contact with corrosive chemicals used in washing drilling tools.

“We are appealing to the President of NICN to help us and intervene in this case, so that the court will give us justice because the judiciary is the last hope of the common man.

“Since 2016, I have been battling with high blood pressure following my husband’s death and my son is asthmatic. Baker Hughes stopped me and my children from accessing their health scheme (HMO) the same week my husband died and since then we have been moving from one hospital to another.”

Similarly, the 300 ex-workers of Baker Hughes, have also called on the President of the NICN, Justice Adeniran Adejumo, to come to their aide by expediting action on the case.

Speaking on behalf of the 300 ex-oil workers, Mr. Enoch Harry, said they have proofs that at least five people who were on the case have been given appointment by Baker Hughes in order for them to drop them the case.

Harry, however, expressed optimism that the new Judge will give them justice, because according to him, the case is a clear abuse of due process, as Baker Hughes did not obey the Nigerian labour laws while rendering them redundant.

“We want to use this opportunity to appeal to the President of NICN and the Nigerian Judiciary to expedite action on this case.

“We have been told that industrial cases are normally resolved between six to nine months, but this our case has been on for almost two years now.

“We filed the case in November 2016 while hearing began in February 2017. All we are pleading for is a speedy action on these cases because every one of us is suffering and Baker Hughes is taking advantage of our suffering.

“Some of our colleagues who were with us on this case have been cajoled by Baker Hughes to drop the case and join them again.”

It should be noted that the 14 widows are demanding for the sum of N7billion as compensation for their late husbands, while the 300 ex-workers are demanding for N13billion as redundancy benefits, which their Counsel Barr. George Ogara had filed an injunction asking the court to prevail on Baker Hughes to pay the money into the court’s bank account.