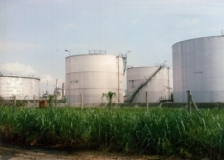 21 July 2012, Sweetcrude, LAGOS – THE recent re-opening of the Nigeria National Petroleum Corporation, NNPC, depot at Aba, Abia State is a landmark achievement and welcome development, especially for the residents of the commercial city o fAba and its environs who have suffered for long due to its closure some years ago as result of insecurity, bunkering and pipeline vandalism.

For those that made the re-opening possible, especially the Abia State government which partnered with the Federal Government and the NNPC management to achieve this, it is a big plus because the development will increase commercial activities in Aba and other nearby states and towns.

There is no doubt that the re-opening was possible because of the level of security that has been achieved and maintained in the state in recent time following the commitment and efforts of the present government in the state.

When the depot was closed some years ago due to insecurity that brought about pipeline vandalism and bunkering, the development inflicted untold hardship on the people in many ways. Apart from some people, especially the petty traders and artisans, losing their means of livelihood, many people were made to pay more for petroleum products, unlike when the depot was functional.

Worst hit by the disparity in products price before now was the state capital Umuahia where dealers of the petroleum products had always justified hike in price to poor electricity supply and other logistics like transportation of the products from Rivers State.

But presently, there is no justification for any filling station in the state to sell petroleum products above the official prices because apart from the products being at their doorstep with the re-opening of NNPC depot in Aba, there is steady power supply in the state capital now. This development no matter what anybody would say was made possible by the synergy between the Federal Government and the Abia State Governor, Chief Theodore Orji. Before now, power supply in Umuahia and its environs was nothing to write home about as it was quite epileptic.
But the problem has been solved now with the partnership between the state government and Federal Government that brought about the successful evacuation of power at 2x 40 MVA, 132/33 transmission substation in Ohiya, Umuahia.

The project which was recently commissioned by Governor Orji has succeeded in stabilizing power supply in Umuahia and its environs. Power outage in the state capital is a thing of the past presently, though it sometimes goes off, but returns without much delay. A development which has boosted commercial activities in the state and stabilized price of petroleum products, as dealers do not have to depend on the use of generators to run their businesses. Same for the business men and women in the state who need power to run their businesses. The noise and other health hazards associated with the use of generators appeared to have been reduced drastically as most homes in the capital and its environs now enjoy steady power supply.

In a bid to reduce or tackle the ugly incidence of bunkering and pipeline vandalism that led to the closure of the depot in the past, Governor Orji has made it clear that he will present a bill to the state House of Assembly seeking to make bunkering and pipeline vandalism a capital offence in the state. Such a move is the much-needed tonic or recipe to guarantee security, ensure effective and smooth operations and assure the management of the depot of their safety and that of their equipment. The move will also discourage or deter vandals and bunkerers who had thrived in the illegal business in the past.

Also to benefit from the re-opening of the depot are the neighbouring towns, villages and states who had before now had to go to Port Harcourt to get petroleum products following the closure of the Aba depot. To ensure that the re-opening of the depot will not bring about congestion on the Enugu/Port Harcourt expressway following the influx of heavy tankers and lorries, the Abia State government has built an ultra-modern park before Osisioma junction to accommodate the tankers and other commercial vehicles in the city.

One remarkable thing about the possible re-opening of the depot is that it goes a long way to show that the restoration of peace and order in Abia State, especially the commercial city of Aba by the present administration in the state is a reality and not a lip service.
Mr.VICTOR OKONJE, a business man, wrote from Aba, Abia State.