Addax denies ‘no work no pay’ threat to striking workers 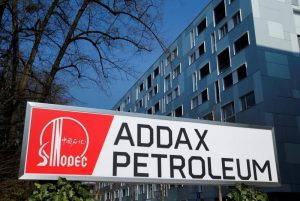 FILE PHOTO – A sign is pictured outside the headquarters of Addax Petroleum in Geneva, Switzerland. REUTERS/Denis Balibouse/File Photo

26 April 2018, Sweetcrude, Lagos – The management of Addax Petroleum has denied issuing a ‘no work no pay’ threat letter to its workers under the umbrella of the Petroleum and Natural Gas Senior Staff Association of Nigeria, PENGASSAN.

In a note to SweetcrudeReports by the company’s spokesperson, Kinglsey Onoyom, the company said it is “not aware” of such a threat.

A recent report quoting the general secretary of the association, Gerald Agwu, said some top officers of the association who are workers of Addax were on Friday served personal copies of the letter following declaration of an indefinite strike over “some unresolved burning issues”.

However, Mr. Onoyom said the previous statement to SweetcrudeReports that its management was working at resolving the issues, still stands.

“I am not aware of any such letter. Our previous statement still stands, Management is engaging the union in a bid to resolve the issues,” the note said.

Despite the alleged ‘no work no pay’ threat, the striking workers on Monday insisted on continuing with their industrial action declared last week.

The workers said the strike was as a result of management’s failure to attend to the critical issues on ground despite several meetings and promises, accusing the management of the company of forming a “culture of impunity against some of its officials”.

Some of the issues included alleged unilateral interpretation of the subsisting collective bargaining agreement (CBA) reached between the union and management in August 2014 on issues bordering on activation of non-statutory remunerations to workers.

Others included alleged targeted victimisation of union leaders; stagnation of some staff for between 10 to 12 years, and selective and discriminatory promotion of workers.

Mr. Agwu, in alleging threat to the striking workers by the management,  said rather than dialoguing over the workers’ grievances, the management, on Friday, issued threat letters to key officials of the union in an attempt to hold them personally responsible for the outcome of the strike.

According to him, the content of the letter to the PENGASSAN chairman indicated he would lose his pay for equal number of days he would be found out of work if he did not call off the strike and return to work.

He said similar letters were served to ”every other top official of the association, including himself, the General Secretary, the Public Relations Officer and others”.

But, the association’s spokesperson said the union has already sent a response to Addax management stating the ‘no work no pay’ threat letter was “completely unacceptable to the workers”.

He said the workers were determined to sustain the strike for as long as it would take management to dialogue on the issues raised by the workers.

“Yes, Addax management issued letters for ‘no work, no pay’ to out union leaders on Friday, April 20, 2018,” Mr. Agwu said during an interview with Premium Times.

“Letters were given to the officials in their personal capacities for actions taken by the association. This is clearly an attempt to victimise officials and intimidate them as a deterrent to others who would be interested in taking up union responsibilities.

“But, there is nothing new in the threat. The whole thing is nothing but an attempt to individualise the collective action by PENGASSAN and break the solidarity of the workers.

“They want to hold the officials personally accountable to the strike action declared by the association during the period. This completely against the tenets and spirit of industrial law, as actions by workers were governed by the rule of collective responsibility,” he added.