Gaborone — Botswana President Mokgweetsi Masisi on Wednesday commissioned a new 1.4 million tonne per year coal mine at state-owned Morupule Coal Mine (MCM), aiming to increase exports after demand for the fuel boomed since the start of the war in Ukraine.

Despite the country’s estimated 212 billion tonnes of coal resources, MCM was its only operating mine until Minergy Ltd (MIN.BT) commissioned a new one in 2019 with an annual capacity of 1.2 million tonnes. 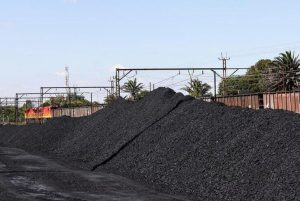 *A Transnet Freight Rail train is seen next to tons of coal, File. REUTERS/Siphiwe Sibeko//File Photo

Many European and Asian countries are scrambling for alternative sources of fuel given the global energy crisis, and Botswana wants to become a key coal producer having already increased sea-borne exports in 2022 through Maputo and Walvis Bay.

The new open cast mine, which will boost MCM’s output by 50% to 4.2 million tonnes per annum, is part of its strategy to supply various markets with a cumulative total of 7.6 million tonnes of coal a year by 2027, in turn growing revenue to 3 billion pula ($222.6 million) from the 1 billion expected in 2023.

“Botswana must seize this opportune time which has presented itself to us, to fully exploit this resource to feed the emerging and diverse markets,” Masisi said.

The open cast mine has the potential to supply power station-grade coal for more than 30 years.

Minergy said last week its total sales volume for the financial year ended June 2022 increased by 40%, with record sales achieved in May 2022.