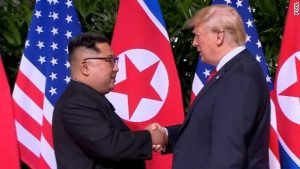 Traders also said they were reluctant to take on large new positions ahead of a meeting between producer cartel OPEC and some of its allies on June 22.

Brent crude futures , the international benchmark for oil prices, were trading at $76.40 per barrel at 0117, down 6 cents from their last close.

U.S. West Texas Intermediate (WTI) crude futures were at $66.08 a barrel, down 2 cents from their last settlement.

Crude has been supported by healthy demand and voluntary production cuts led by the Organization of the Petroleum Exporting Countries (OPEC), but analysts said oil markets were also currently heavily driven by public policy events and statements.

Trump and Kim have arrived at the Singapore-venue for their summit on Tuesday, with the goal to narrow differences over how to end a nuclear standoff on the Korean peninsula.

“Any positive outcome could be good news for markets, even if gold and oil may take a short-term hit,” he added.

In oil market fundamentals, however, not all things point to higher prices, with output from the three biggest producers, Russia, the United States and Saudi Arabia on the rise.

Russian production has reportedly risen from below 11 million barrels per day (bpd) to 11.1 million bpd in early June.

In the United States, production has risen by almost a third in the last two years, to a U.S. record of 10.8 million bpd.

“The deluge of U.S. crude production continues to hold the top-side in check,” said Stephen Innes, head of trading at futures brokerage OANDA.

“This fits with the theory that the Saudis and Russians are subtly moving towards a change to the agreement at this month’s meeting,” McKenna said.

OPEC, together with some non-OPEC producers including Russia, started withholding output in 2017 to end a global supply overhang and prop up prices.

OPEC and its partners are due to meet on June 22 at the cartel’s headquarters in Vienna, Austria, to discuss policy.

“Expect more of the same whippy markets driven by rumours and innuendo ahead of June 22 Vienna OPEC meeting,” Innes said.