on: October 31, 2019In: Community Development, featured 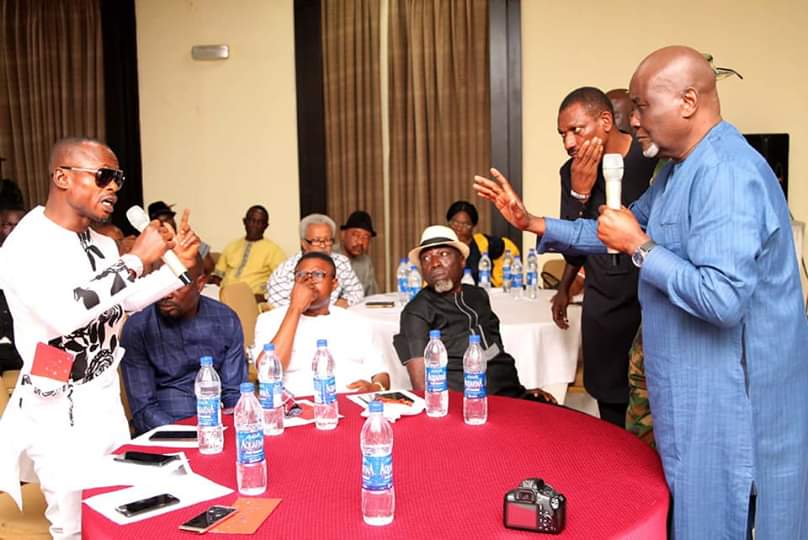 Port Harcourt — Coordinator of the Presidential Amnesty Programme, Prof. Charles Dokubo, says he has maintained zero tolerance for any form of illegality under his watch, though he observed distortions in the structure of the Programme on assumption of office.

Speaking at an interactve session with 97 leaders of Niger Delta ex-agitators in Calabar, Dokubo said even as he had never altered the structure he inherited especially with regards to beneficiaries captured in the database of the Amnesty Programme, he took steps to redress glaring irregularities and cases of injustice.

While calling for their support, the Amnesty boss urged the ex-agitators to always protect the interest of the Niger Delta people, stating the need for regular dialogue to resolve the issues, as there was no issue nothing beyond resolution.

“I am so elated because of this meeting, which is a meeting of minds. It is proper we come together and discussed issues affecting this Programme face to face, so that we can take care of the challenges before us.

“There is no issue that we cannot resolve if we can meet and discuss those challenges that we face. If there is an issue that has been disturbing you, this is a forum to talk about it.

“But I also state clearly here, since I took over the leadership of this office, anything about camp closure, camp reorganization, I have never done any camp closure or reorganization. I pay as it is now, from the beginning. The way your stipend is, is the way you have been receiving it.

“No camp has been closed; no person can say that he has not received his stipend as at when due, and I have never tampered with anything that is in the structure of the Amnesty Programme.”

On complaints of exclusion of genuine beneficiaries of the Amnesty Programme under previous administrations, Dokubo said such issues were being addressed in line with statutory provisions.

He assured that all beneficiaries of the Programme will always get their entitlements promptly.

“People that had been excluded knowingly or unknowingly, I have looked at their cases and brought them back so that they could earn what they are entitled to. I have seen people who without their knowledge, they were excluded even before I came into office. I have addressed these issues because I can’t allow something that is illegal to take place.

“If you have an entitlement, your entitlement will be paid to you. I have also gone beyond ensuring prompt payment of stipends; once in a while, I meet with the leadership of ex-agitators to address issues. But we must understand that while the Amnesty Programme is for Niger Delta, not every Niger Deltan is a beneficiary of the Amnesty Programme. There are people who are to benefit from the programme.”

Dokubo, who expressed concern on what he described as a disconnect between the leadership of Niger Delta ex-agitators and their followers, said the interactive session is aimed at bridging the gap to consolidate the Federal Government’s efforts at deepening peace in the region.

“I called you to hear me out and also to understand my vision. This programme has faced challenges. The main reason for this meeting is not only to meet with you, but also to give you something for you to ponder about. What structure of leadership do you have? When leaders talk, do followers obey?​ And if you have a complaint, can’t you address it through the leadership?

“I think that there is disconnect between leadership of the ex-agitators and the members as a whole, and until that gap is bridged, it will be difficult for us to deal with the issues. When I hear about people trying to short-change genuine beneficiaries of the Amnesty Programme, I ask the question, do we really care for our people?​

“Let us all be fair-minded in dealing with issues. We have to work together because we have a common project. I have lot of issues confronting me now which took place when I was not in office, especially cases of exclusion from the programme, and I stopped those things.”

Responding on behalf of the ex-agitators, Leader of Peace Camp in Bayelsa State, Chief Kalaiti Jephthah-Obadiah, commended Dokubo for the initiative, which he said, will enhance peace and security in the region.