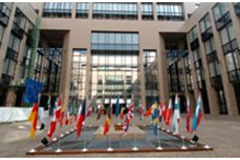 National General Congress on 7 July 2012 and has taken note of the announcement of the preliminary results made on 17 July. The EU commends the Libyan authorities, notably the

High National Election Commission, for their preparation and management. The EU warmly congratulates the Libyan people for this significant milestone in the ongoing transition and believes that these historic elections should lay the foundation for the future democratic development of Libya.

*The EU salutes the important work undertaken by the Libyan National Transitional Council under the chairmanship of Mr. Abdul Jalil and by the interim government led by Prime Minister Mr. Al Keib, often under extremely difficult circumstances. The EU looks forward to working with the future Libyan government to be appointed following the establishment of the General National Congress, and hopes that the appointment process will retain the momentum of transition and enable the new Libyan Government to start work as soon as possible.

*Libya will shortly embark on a process of elaborating a new Constitution. This will be a critical document in shaping the future Libyan state. It is therefore important that the drafting process is inclusive and transparent and that the new Constitution, reflects the aspirations of the Libyan people for dignity and justice by ensuring respect for human rights and fundamental freedoms for all women and men, including protection of minorities, and democratic values.

*At the same time the EU stresses the fundamental importance of respecting the rule of law and protecting human rights and fundamental freedoms for all women and men during the process of transition. It calls again on the authorities to address and investigate reports of torture and illegal detention and to bring those responsible to justice. The EU urges the Libyan central Government to accelerate the process of bringing all places of detention under its full control.

*The EU recognizes the serious security challenges Libya is facing. The EU reiterates its readiness to provide further assistance, including through CSDP if appropriate, in the areas of security and border management, in close partnership with Libya’s new democratic authorities and in coordination with UN Support Mission in Libya (UNSMIL) and the rest of the international community. Establishing secure and stable borders is key to ensuring wellmanaged migration. The EU stresses the importance of post-conflict disarmament, demobilisation and reintegration and reiterates its concern regarding the proliferation of all arms and related material of all types in line with the UNSCR 2017 (2011). It stresses the need for a response based on close coordination with international partners and countries in the region, and it recalls the relevance of the EU Sahel Strategy in this regard.

*The EU reiterates its determination to further strengthen its engagement with Libya, a key neighbour for Europe with whom the EU wishes to establish long-term and mutually beneficial relations, including in the framework of the European Neighbourhood Policy and regional initiatives such as the Union for the Mediterranean. The EU further supports enhancing synergies with other regional initiatives such as the 5+5 Western Mediterranean Forum. It will continue to provide strong support for Libya across a range of sectors, as already set out in the FAC Conclusions of 10 October 2011, in the interests of securing a peaceful, democratic and prosperous future for its people. The EU is also fully supportive of stepped up efforts on regional integration across the Maghreb, including through the Arab Maghreb Union, and stands ready to support this process.”