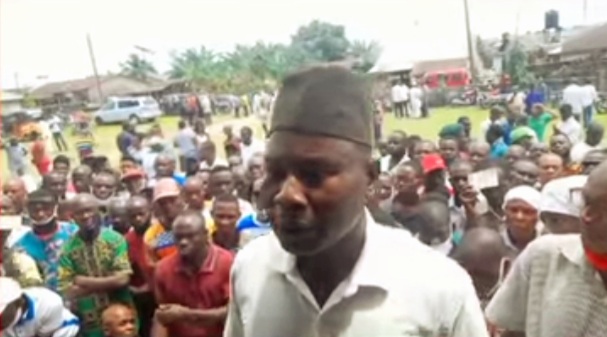 *1,444 disengaged workers of ExxonMobil during a peaceful demonstration in Eket, Akwa Ibom State

Port Harcourt — A total of 1,444 disengaged workers of ExxonMobil in Eket, Akwa Ibom State, have called on relevant stakeholders to prevail on the oil multinational for the payment of their terminal benefits of N11.4billion, else they will take the laws into their hands.

The affected ex-workers during a peaceful demonstration in Eket, accused the oil company of violating their rights and inflicting pains and hardship on them by denying them their N11.4 billion entitlements.

The protesters speaking in their local Ekid dialect, said several letters have been sent to Presdient Muhammadu Buhari and Vice President Yemi Osinbajo, the National Assembly, NNPC to intervene on the matter but to no avail.

One of the protesters, identified as Akan Tommy, said they can no longer engaged in fishing and farming because of the pollution from ExxonMobil operations in the area.

Tommy explained that they were engaged as contract staff by ExxonMobil and later laid off in 2012 without commensurate severance benefits, as contained in the Collective Bargaining Agreement, which they had with the company.

“We have written to the United States, the National Assembly, the Presidency to no avail. So we are calling on leaders who have been at the forefront fighting against inhumanity against the region.

“Government Ekpemupolo, please we’re pleading wherever you are, come to our rescue and talk to ExxonMobil. We know that you have the capacity. Tell them to pay us. We dont want violence. We want peace.

“Chief Edwin Clark, we are your children; please call ExxonMobil to order. Alhaji Asari Dokubo, you have been fighting for the Niger Delta, we have met you on this issue and you assured us you will intervene.

“We have sent several letters to Presdient Buhari and Vice President Yemi Osinbajo. The Vice President acknowledged receipt of the letter and assured us that he will meet with the management of ExxonMobil, but since then, he never got back to us.

“ExxonMobil operations have left our lands, air and creeks polluted, our traditional occupations like fishing and farming is no longer sustainable. We need relevant stakeholders to prevail on ExxonMobil to pay us our entitlement.”