on: August 04, 2020In: Community Development, featured 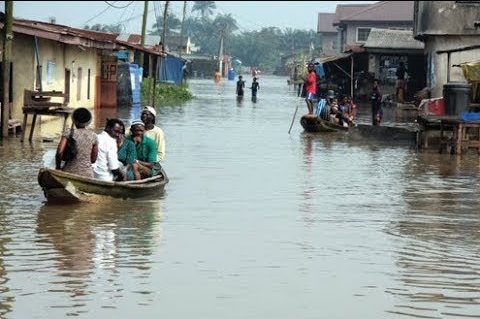 Port Harcourt — A group known as Bonny Improvement Association, has attributed the incidence of flooding on Bonny Island to the activities of international oil companies operating on the island.

The group particularly mentioned the Shell Petroleum Development Company of Nigeria Limited, Mobil Producing Nigeria Unlimited, Nigerian Liquefied Natural Gas Limited, and the Nigeria Ports Authority, calling on them to partner with the local government authorities to build canals in the island, as obtainable in Holland.

Chairman of the association, Prof. Sodienye Abere, explained that the incessant flooding in the island community was as a result of construction of embankments along the shores of the Bonny waterbodies, by these oil firms, in order to protect their facilities.

Abere said Bonny was now like a bowl, as the multinationals operating in Bonny were using sand from Bonny channel and reinforcing the outside boundaries of their facilities on the island, thereby blocking the natural drains taking flood waters out from the island into the sea.

“Bonny Island is sinking and so below sea level, the knowledge and reality of which the IOCs in Bonny capitalize on to ensure raising all their structures high above ground level. All the foreshore of the various properties in use by the IOCs have been filled with sand weaned from the Bonny channel. Bonny now appears as a bowl.

“There is constant flooding on the island because the natural drains into the sea have been blocked by the embankment along MPNL, NLNG, NPA and SPDC facilities.

“BIA calls for immediate and urgent canalization of the island to allow for free flow of water at all levels. A prototype of what Holland and Netherlands exhibit. These canals can be used as waterways communication in addition to solving the problem of flooding.”

The group lamented the high cost of living on the island, including cost of landed properties and foodstuffs, as these food items are imported from other parts of Rivers State and neighbouring states, while calling for the establishment of industries and factories on the island.

“There should be establishment of cottage production and fabricating industries to properly engage our citizens. IOCs operations should be located on the Island.

“Food and organic treatment plant should be built and manned by residents in Bonny. The IOCs operating in Bonny and the Bonny local government authorities should engage our people in a Public Private Partnership to remove the funding hurdle.”