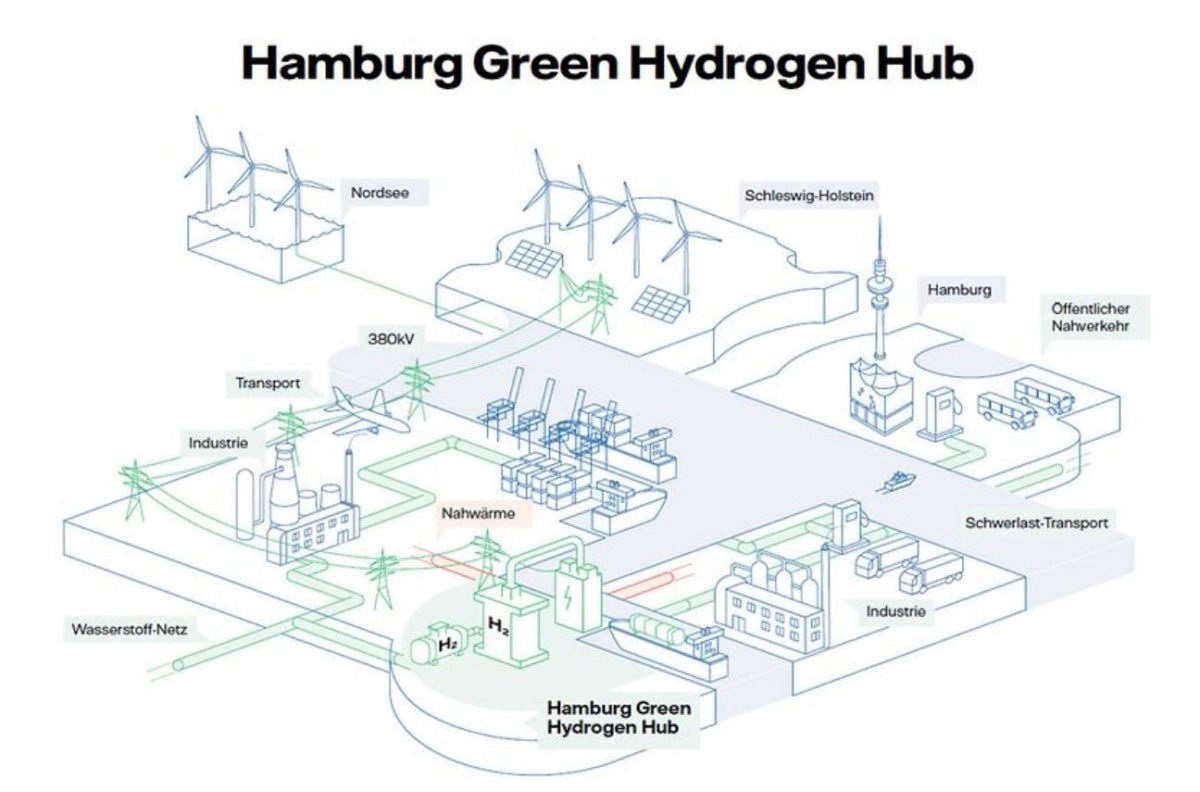 *100 MW capacity to be installed in the Port of Hamburg (Moorburg site) from 2025 onwards
*Hamburg is on its way to becoming European hub for green hydrogen economy
*According to the OECD, the Hamburg metropolitan region is one of the most promising hydrogen regions in Europe

Hamburg, Germany — The companies Vattenfall, Shell, Mitsubishi Heavy Industries (MHI) and Hamburg’s municipal heat supplier Hamburg Wärme are planning to build one of the world’s largest electrolysers in the Port of Hamburg.

The new electrolyser is to have a capacity of 100 megawatts and be built on the site of the former Moorburg coal-fired power plant. The four companies have now signed a Letter of Intent.

The Hamburg metropolitan region thus continues to position itself to take a leading position in the European green hydrogen economy – and, according to the OECD, brings excellent prerequisites to the table.

The region and the surrounding northern German states already score with a high share of renewable energies and are planning the rapid expansion of the green hydrogen economy along the entire value chain. In this, Northern Germany wants to lead the way on an international scale and further strengthen its position.

As home to Europe’s third-largest port and a strong ecosystem of business, politics and application-oriented research, Hamburg plays a key role in this. A new milestone has now been set with the Letter of Intent to convert the Moorburg coal-fired power plant into one of the most powerful electrolysers in the world.

In this context, concepts for the necessary logistics chains and storage options for hydrogen will also be considered. Subject to final investment decision and according to the current state of planning, once the site has been cleared, the production of green hydrogen is anticipated in the course of 2025 – making the electrolyser one of the largest plants in Europe.

The partners intend to apply for funding under the EU program “Important Projects of Common European Interest” (IPCEI). This should take place in the first quarter of 2021 with the submission of a first outline of the project. The four partner companies view the energy location as having ideal conditions for further use.

It is connected to both the national 380,000 volt transmission network and the 110,000 volt network of the City of Hamburg. In addition, overseas ships can call at the location directly and use the quay and port facilities as an import terminal.

The municipal gas network company also intends to expand a hydrogen network in the port within ten years and is already working on the necessary distribution infrastructure. Numerous potential customers for green hydrogen are located near the site, thus enabling the project to cover the entire hydrogen value chain – from generation to storage, transport and utilization in various sectors. With these prerequisites, the Moorburg location is optimal for the German federal state of the Free and Hanseatic City of Hamburg and Northern Germany and can become a potential starting point for the development of a hydrogen economy.

For many years, Moorburg was the site of a gas-fired power plant operated by Hamburgische Electricitäts-Werke, and Vattenfall had been operating a coal-fired power plant here since 2015. Its commercial operation was terminated after the power plant won a bid in the auction for the nationwide coal phase-out in December 2020.

A decision by the transmission system operator on the system relevance of the plant is expected in March 2021. The City of Hamburg and Vattenfall are striving to clear [partial] areas of the site as soon as possible for the project to produce green hydrogen and the development of a Green Energy Hub.

In their efforts to form a consortium, the four companies can also count on the support of the City of Hamburg’s government. In their coalition agreement, the governing parties agreed to examine and support the feasibility of sector coupling and the establishment of hydrogen production in the city-state.

Jens Kerstan, Chairman of the Supervisory Boards of Wärme Hamburg GmbH and Gasnetz Hamburg GmbH as well as the Free and Hanseatic City of Hamburg’s Minister for the Environment and Energy disclosed that “For Hamburg as a city that embraces the energy transition, this agreement is a vital step. At the Moorburg site, we will be producing green hydrogen on a large scale in collaboration with experienced partners from industry, while at the same time establishing a Green Energy hub for climate-friendly energy. This is a bold venture that now needs to be filled with life. This project will be a major lever for reaching our climate goals. The gas pipeline networks in the port and around Moorburg are now being expanded to accommodate hydrogen and to facilitate supplies to industry and large businesses. Our hydrogen future is now taking shape, and Hamburg intends to be at the forefront here. The Hamburg Senate supports these efforts, and Hamburg’s public companies play a decisive role in this.”

Michael Westhagemann, Minister for Economy and Innovation of the Free and Hanseatic City of Hamburg said “I always believed in the project at the Moorburg site. There is no better location in Hamburg for a scalable electrolyser of this size. Via the 380 kV connection and the connection to Brunsbüttel, we have direct access to the supply of green electricity from wind power – and thus the possibility of actually producing green hydrogen in relevant quantities. With this announcement, a big step will be taken towards a long-term decarbonisation of the port and a competitive hydrogen economy in the metropolitan region of Hamburg and I congratulate the partners on this forward-looking project.”

Kentaro Hosomi, President and CEO Energy Systems, Mitsubishi Heavy Industries: “We are looking forward to having the opportunity to apply our engineering and technology expertise to realize this project together with our partners. The establishment of a green hydrogen hub that is fully integrated into Hamburg’s industrial infrastructure would show Europe and the world that the hydrogen economy is real and can make a significant contribution to the decarbonization of the energy system and heavy industry.”

Fabian Ziegler, CEO of Shell in Germany: “In the future, green hydrogen will play a very important role in the energy system and therefore also for us. We keep an eye on the development of the entire value chain for hydrogen; from the entry into electricity production from offshore wind to the expansion of capacities for green hydrogen production as well as to the supply for mobility or transport applications and other industries. To achieve this, we need to and we want to collaborate with strong partners. We consider this project of the consortium of four together with the city of Hamburg to be exemplary.”

Andreas Regnell, Senior Vice President and Head of Strategic Development, Vattenfall: “The production of fossil free hydrogen is one key to the decarbonisation of the industry and the transport sectors. Vattenfall wants to enable fossil free living within one generation and we have high ambitions to grow within renewable energy production in the markets where we operate. In this project we can contribute with our expertise and experience and the unique Moorburg site that has the infrastructure that is necessary for large scale production of hydrogen. We are therefore pleased that we can support the city and the industrial location of Hamburg in implementing their ambitious climate goals.”

Christian Heine, CEO of Wärme Hamburg GmbH and Gasnetz Hamburg GmbH: “Hydrogen has enormous potential not just as a means of power storage. Wärme Hamburg has pledged to make available all sources of waste heat and to utilize this climate neutral heat. This is the reason why Wärme Hamburg decided, to take part in the electrolyser project. In addition we want to evaluate if we can use the existing infrastructure at the Moorburg site, also to use other, additional forms of renewable energy. Moorburg has the potential to become an innovative urban hub for renewable energies.”