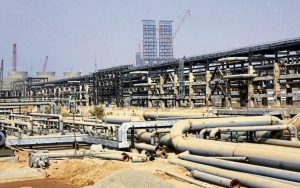 *An oil refinery in Bhatinda Punjab.

01 August 2017, Singapore/New Delhi — Indian refiners are outperforming their competitors in South Korea and Thailand as they have ramped up output from new fuel and chemical capacities to meet rising domestic demand that could further lift their earnings over the next two years.

Asia is adding net refining capacity of 360,000 barrels per day (bpd) this year, according to Wood Mackenzie, with units coming online in China and Vietnam that could keep most of Asia well-supplied and weigh on refining margins for export-oriented refiners in South Korea and Thailand.

India, though, where refiners have already ramped up capacity that has come online, will likely be shielded from the pressure on margins by strong local demand, analysts said.

Surana expects Indian demand growth of about 5 percent a year up to 2030 as a rising population and increasing affluence drive up oil use in the world’s third-largest crude importer.

Indian refiners Bharat Petroleum Corp Ltd, HPCL and Reliance Industries could see their shares rising, with gains between 11 percent for Reliance and 25 percent for BPCL over the next year, the analysts said.

Among the refiners that have recently added capacity are BPCL, which is ramping up output after an expansion at its Kochi refinery, and Indian Oil Corp, which is planning to run its Paradip refinery at full capacity this year.

“Multiple re-rating could continue as investors give more credit for diminishing regulatory headwinds and sustainable earnings growth,” the analysts said.

Regulatory changes in India that allow refiners to charge market rates for fuels, they said, have also improved the profitability at domestic refiners.

In contrast, Goldman said added capacities across Asia could dampen gross refining margins. The bank expects Singapore complex refining margins to drop to $7.70 and $7.30 in 2018 and 2019, respectively, from $8 this year.

“Only a few secondary units are expected to come onstream in the next five years,” he said, while India’s strong economic growth will continue to drive rising oil demand going forward.