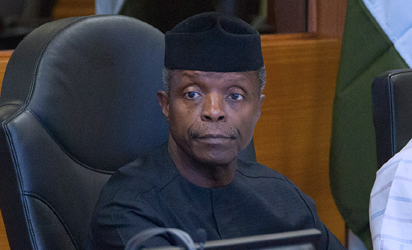 19 November 2017, Sweetcrude, Abuja – The Vice President, Prof. Yemi Osinbajo said on Saturday that money laundering posed a serious threat to crucial existential issues in West Africa, stressing that the menace needs to be tackled with utmost unity and determination.

Osinbajo, who stated this at the opening ceremony of the 18th ministerial committee meeting of the Inter-Governmental Action Group against Money Laundering in West Africa (GIABA), in Abuja, said the political and economic stability of countries in the sub-region depended heavily on a successful war against the movement of the proceeds of crime.

He lamented the obstacles to the repatriation of looted funds stashed in the developed countries, despite various mutual assistance treaties and the Financial Action Task Force (FATF) recommendations.

Osinbajo said, “At risk from money laundering, especially the laundering of proceeds of corruption, and terrorist financing, are the stability of our financial and political systems, and ultimately the development of our countries and the prosperity of our people.

“What this means is that we are dealing here with an existential threat – it’s either we wipe it out or it wipes us out.”

He added that, “We know that the lines between terrorist groups, corrupt politicians, traffickers (whether of drugs, guns or people); fraudsters; smugglers; kidnappers; illegal oil bunkerers, etc., have always been blurry; that these groups have always found complementary need for one another’s tactics and strategies.

“Indeed, if there’s one thing that the world’s deadliest terrorist groups, from Al Qaeda to ISIS to Al-Shabaab, have in common, it is the ease and expertise with which they diversify their criminal activity while retaining their overarching goal of inflicting maximum devastation.”

Osinbajo said the wide-ranging dangers of money laundering and other financial crimes should spur the countries to treat such criminalities with zero tolerance.

“We have for long enough affirmed our commitment as a sub-region to fighting money laundering and terrorist financing. We must now back this intent with forceful action and visible results,” he said.

He acknowledged the previous efforts of countries within the sub-region to fight money laundering and terrorist financing, but said more needed to be done, especially to keep abreast of new criminal tactics.

According to the vice president, “Information sharing is very important to the success of our fight. This means that on the one hand we should rise above the temptations of secretiveness and mutual suspicion; and on the other hand, we must do everything in our power to sustain trust and confidence by safeguarding every piece of information that is being shared across national databases.

“We must also strive to work beyond the barriers imposed by the differences in our various legal systems, bearing in our minds that the criminals we are tackling have never allowed themselves to be held back by these obstacles.”

Osinbajo lamented the barriers to the return of looted funds from the developed countries.

“Permit me to raise a matter of considerable importance to many of our nations,” he told the ministers from member states of the GIABA (the 15 ECOWAS countries, and Sao Tome and Principe), explaining, “It is the difficulty we experience in repatriating proceeds of corruption from financial institutions of the more developed nations.

“Despite numerous mutual legal assistance treaties and conventions, it is obvious that we are not making the sort of progress we expect to see. It is unconscionable, in our view, to have stolen funds in a bank within the jurisdiction of an FATF country and to have to go through a rigorous obstacle course to retrieve the funds and even when such funds are to be returned after several years, humiliating conditions are attached.”

He said, “It is the view of Nigeria that FATF countries must, as a matter of respect for the spirit of our collaboration, and with the same efficiency and zero tolerance for quibbling, ensure the smooth repatriation of proceeds of corruption to the economies from where they were stolen.

“The other issue is the dangers posed by anonymous corporate ownership. If nothing else, the Panama Papers, and now the Paradise papers, clearly illustrate the global scale and spread of this problem. So this is a global challenge and nothing less than a truly global approach will be needed to tackle it.”

Osinbajo, however, commended the United Kingdom, Norway, Netherlands, and Denmark for establishing public registers of the real, human owners of companies within their territories.

He stated, “We call on other G8 and G20 countries not only to follow suit but also to initiate actions to end corporate secrecy in some of their dependencies. We cannot have anonymous ownership of companies, trusts and other arrangements designed to cover ownership of assets, and at the same time expect optimal results from anti-money laundering measures.”

Meanwhile, Speaker of the ECOWAS Parliament, Hon. Moustapha Cisse Lo, has called on companies, development agencies, and donors in the sub-region, like MTN Foundation, European Union, United Nations agencies, and African Capacity Building Foundation to support the parliament with resources needed for the execution of its development projects. Cisse Lo stated this yesterday in Abuja at the closing of the ECOWAS Parliament, Fourth Legislature, 2017 Donors Conference.