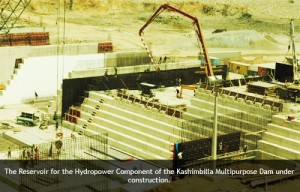 05 July 2012, Sweetcrude, Abuja – The Federal Government has assured the people of Taraba State and its neighbours that the Kashimbila multi-purpose dam in the state would be completed on schedule.

The Minister of State for Power, Mr. Darius Dickson Ishaku, who gave the assurance when the Governor of Taraba State, Mr. Danbaba Suntai paid him a courtesy visit, in his office in Abuja, said the N60.63b project would not be abandoned as Federal government realizes the economic potentials of the 40MW capacity hydro power.

He added that the hydro power component of the dam being financed by the Federal Ministry of Power would increase the National power generation by 40MW when completed.

The Minister said the Federal Government is committed to the improvement of lives of the citizens through the provision of regular supply of electricity to all Nigerians for both domestic and commercial purposes.

Ishaku further explained that the current tariff adjustment was to encourage investors in the power sector and to make regular electricity supply sustainable for economic growth and implored the Governor to sensitize his subject on the reforms in the sector which are for the good of the citizens.

Adding that the adjusted rate of payment for the commercial users is minimal when compared to the amount spent on self alternative power, currently.
It will be recalled that Contract for the Kashimbila multi-purpose dam was awarded in May 2007 at an initial sum of N42.93bn but was revised to N60.63bn due to the upgrading of the hydro power component from 6MW to 40MW by the Federal Executive Council.
The multi-purpose dam when completed will provide electricity, pipe-borne water for domestic and economic purposes, tourism, fishery, irrigation to the people of Takum, Kashimbila and Gamovo on River Kastina-Ala areas of Taraba State.
The Minister of Power, Prof. Bart Nnaji recently disclosed that it plans to commission more than 3,300 mega watts of electricity in new independent power plants over the next two years.
He also stated that plans are underway to generate an additional 3,509MW in capacity through existing National Integrated Power Projects, NIPP, in the Federal government’s bid to boost capacity and promote private investment in the power sector.
Nnaji, who made the disclosures during a presentation at the National Power Sector Retreat, with the theme: Leapfrogging into Sustainable Power Supply, in Abuja, also stressed that the challenge with procuring gas by the Independent Power producers was a major hindrance to the government’s goal of achieving improved generation.
According to him, government was ready to “incentivize the private sector to make investments in the domestic gas industry by ensuring that the approved price to be paid to gas producers remains close to export parity price to LNG plants or other projects in Nigeria, and most importantly that this price is passed through to electricity consumers.”
Also, he added, government would provide, where necessary, FGN-backed credit support so that gas suppliers can secure the financing required for their investments, as well as ensuring the formulation of a gas regulation office and completing the gas contracting framework.
Nnaji explained that the retreat was “very critical for progress in the power sector. We have a roadmap, which is a plan to take us where we want to be with regards to the sector. It is important to take a pause and review your progress, and see if you are following the plan and to point out areas of improvement.”
The N60B Kashimbila dam is scheduled to be commissioned for production in April 2014.