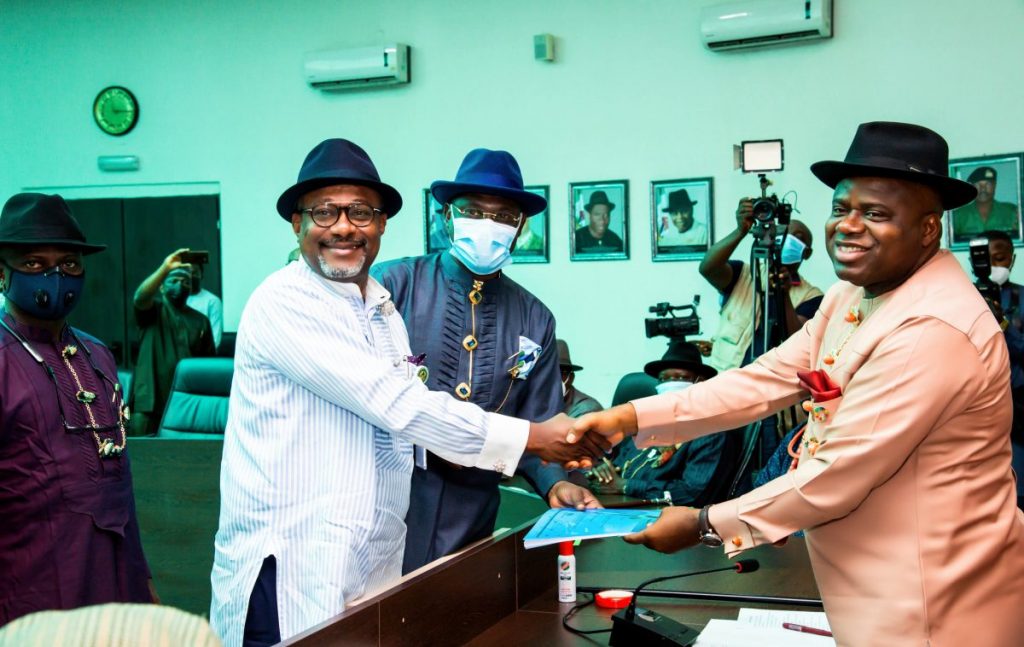 *Executive Secretary of NCDMB, Engr. Simbi Kesiye Wabote in a handshake with Governor Douye Diri of Bayelsa State and the Attorney General and Commissioner of Justice of Bayelsa State, Mr. Biriyai Dambo after the signing of the Power Purchase Agreement between NCDMB and the State Government on Wednesday in Yenagoa.

Yenagoa — The Nigerian Content Development and Monitoring Board, NCDMB and the Bayelsa State Government on Wednesday signed a Power Purchase Agreement, PPA for the delivery of electricity from the 10 megawatts gas fired independent power plant constructed by the NCDMB in partnership with the Nigerian Agip Oil Company at Elebele, Bayelsa State.

The Power Purchase Agreement was signed in Yenagoa by the Executive Secretary of NCDMB, Engr. Simbi Kesiye Wabote and the Attorney General and Commissioner of Justice of Bayelsa State, Mr. Biriyai Dambo and was witnessed by Governor Douye Diri.

The power plant alongside the 17 storey Nigerian Content Tower, NCT were commissioned by President Muhammadu Buhari on August 14 2020.It was conceived to supply uninterrupted power supply to the NCT, the Oil and Gas Park being developed by the Board at Emeyal 1, Ogbia Local Government Area in Bayelsa State.

In bid to maximize the utilisation the Board entered into an agreement with the Bayelsa State Government to also supply uninterrupted electricity to key facilities of the state which would be paid for as specified in the PPA.

Speaking at the event, the Executive Secretary noted that the terms of the Power Purchase Agreement would ensure that the power plant would operate on a sustainable basis with settlement of obligations to the gas suppliers, operation and maintenance contractors, purchase of spare parts and consumables required for timely maintenance.

According to him, “the power supply is not free as all users including NCDMB are expected to make pre-payment deposit for their power requirements just as required by our gas suppliers. We were required to make up to six months deposit with the Gas Aggregation Company Nigeria before we got gas supply to the power plant. We believe there will be no default from any party that will trigger unpleasant outcome in the sustainability of the power plant operations.”

Wabote described the occasion as a major milestone in the collaboration between NCDMB and the Bayelsa State Government, adding that the importance of reliable power supply to enhance the efficient operation of government activities cannot be over emphasised.

He added that the event also provided a form of inspiration to all Bayelsans that it is possible to provide reliable power supply to the entire state considering the abundant gas resources available in the state.

Governor Douye Diri in his comments noted that the state is blessed with abundant gas resources as well as other energy resources, which had been largely under-utilised, stressing that his administration was determined to utilize the resources of the state for the benefit of the people.

He commended the NCDMB management and other partners that made the agreement possible and charged on private investors to explore the abundance of natural gas in the state, assuring that the government was ready to partner with such investors to make power and other amenities available to the people.