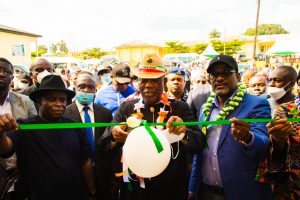 Port Harcourt — The Nigerian Content Development and Monitoring Board, NCDMB on Friday handed over ultra-modern Woodwork and Carpentry workshops it renovated and upgraded at the Government Technical College, GTC Abak, Akwa Ibom State.

The commissioning of the facility was performed by the Governor of Akwa Ibom State, Mr. Udom Gabriel Emmanuel, represented by the Secretary to the State Government, Dr. Emmanuel Ekuwem and the Executive Secretary of NCDMB, Engr. Simbi Kesiye Wabote.

In his address, the Executive Secretary disclosed that NCDMB invests in the rehabilitation of Technical and Vocational Education and Training Institutions, TVETs because they provide platforms to job creation and self-empowerment. He added that the development of skilled technicians drives the socio-economic growth aspirations of the President Muhammadu Buhari’s administration and engages youths in productive ventures.

He emphasised the need to provide high quality manpower training and skills development for the teeming youths in the country, which was why the Board undertook a study on TVETs in Akwa Ibom, Bayelsa and Rivers states to understand the factors militating against the optimal performance of those institutions.

He mentioned that the Board had finalized plans for the implementation of a public-private in collaboration with the Akwa Ibom State and a specialist modern furniture production firm, owned and managed by an indigene of the Abak community, in which a certain percentage of the proceeds will be ploughed back for the operational maintenance of the facilities to achieve self-sustenance.

Wabote commended the Abak community and Akwa Ibom State Government for their cooperation in actualizing the projects, stating that the Board’s decision to have earmarked GTC, Abak as one of the flagship beneficiaries of its institutional upgrade program was not an effort in futility. He thanked all stakeholders for the zero-incidence recorded and the unparalleled hospitality the Abak community extended to the contractors and personnel.

He charged the technical institution which is one of the foremost in the region to become a Centre of Excellence in carpentry/woodwork through the provision of high-quality training to both teachers and students in an affordable, safe, sustainable and efficient manner, while satisfying the yearnings of the local and international furniture industry as part of efforts to create wealth and diversify the economy while increasing foreign exchange earnings.

The Executive Secretary decried the low level of students’ enrolment into TVETs institutions, which is less than one percent of the total enrolment in conventional secondary schools.

Noting that youths make up more than 50 percent of the nation’s population, he regretted that the nation is yet to fully harness its potential in driving economic growth as many young people are faced with challenges ranging from lack of practical skills, unemployment and illiteracy, among others.

He also challenged youths of the country to acquire marketable skills and competencies that will position them to overcome the high rate of poverty, social vices, unemployment and underemployment in the country.

He hinted that harnessing and refocusing the creative energies of youths to productive endeavours through an aggressive skills development training in various relevant trades will foster sustainable development.