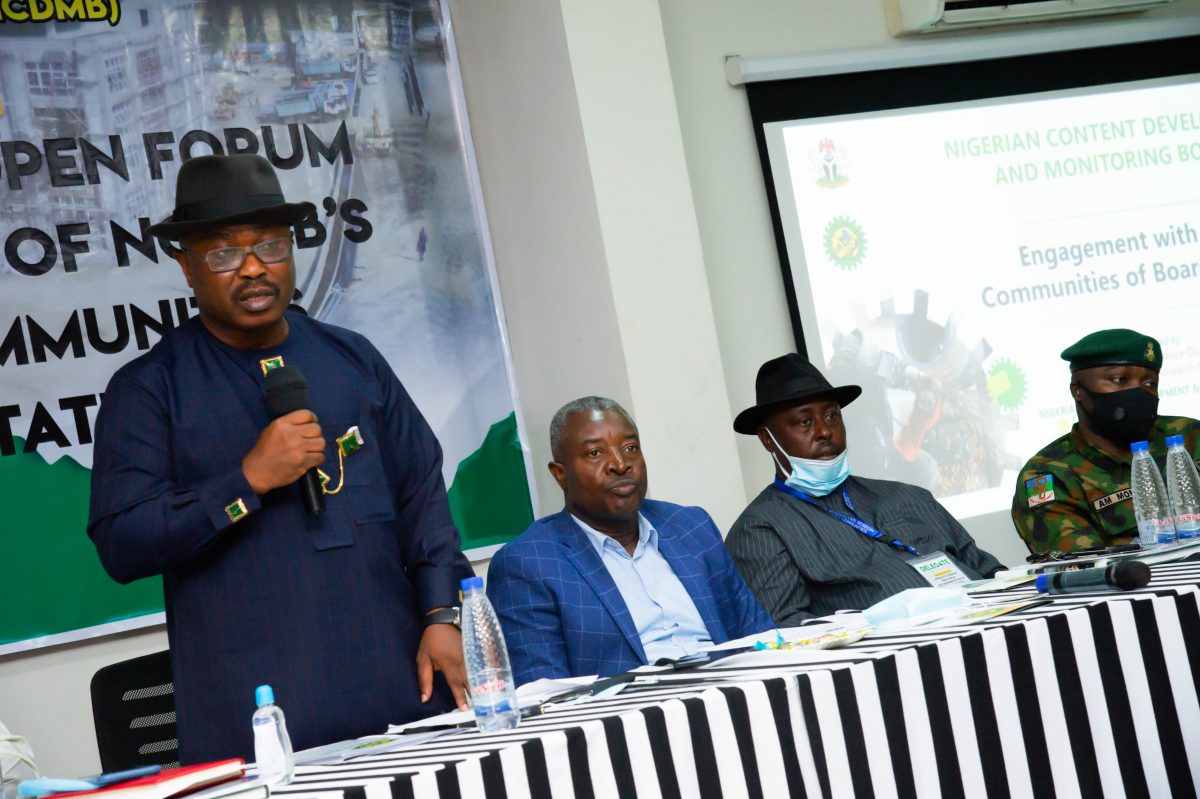 Lagos — The Nigerian Content Development and Monitoring Board, NCDMB on Tuesday in Yenagoa held the maiden interactive session with representatives of host communities of its major projects in Bayelsa State and charged them to protect and support the projects in their localities to ensure their timely completion and creation of job opportunities from their operations.

The interactive session was convened to create a direct channel of communication between the Board and the host communities, to explain the economic opportunities expected from the projects and clarify the Board’s mandate and correct misconceptions that create frictions between the communities and the Board or with contractors on the projects.

In his presentation, the Executive Secretary of NCDMB, Engr. Simbi Kesiye Wabote outlined the various infrastructural schemes and human capital development initiatives being executed by the Board in Bayelsa state, in line with its mandate of developing local capacities and capabilities in the oil and gas industry and monitoring compliance and enforcing provisions of the Nigerian Oil and Gas Industry Content Development (NOGICD) Act.

He described the Nigerian Content Tower at Swali, Yenagoa and the Nigerian Oil and Gas Park at Emeyal 1 in Ogbia Local Government Area of Bayelsa State as two direct projects of the Board that have added significant value to the economy through the number of jobs created, skills transferred and spend retained in the state. He added that the Oil and Gas Park would incubate in-country manufacturing of oil and gas components and create over 2000 jobs when fully operational.

Represented at the event by the Director, Planning, Research & Statistics, Mr. Daziba Patrick Obah, the Executive Secretary clarified that projects like the Rungas Gas composite cylinder manufacturing facility at Polaku, the Azikel modular refinery and Eraskon Lube Oil blending plant, both at Gbarain were being developed by private promoters with equity investments by the Board.

Similarly, the Atlantic Modular Refinery at Okpoama, the methanol production plant at Odioama and Brass Petroleum and Products Terminal, Okpoama were also being constructed in partnership with other institutional and private investors, he added.

He explained that the Board partnered with third party investors with the intention of catalyzing those projects, domiciling critical oil and gas investments, and creating job opportunities, after which it would divest its stakes from the investments.

He charged community leaders and youths to promote peace in their domain and protect the projects till their completion, to create the employment opportunities and industrialization they crave for their communities.

In his remarks, the General Manager Corporate Communications and Zonal Coordination NCDMB, Dr Ginah O. Ginah hinted that NCDMB had several projects in Bayelsa State because its headquarters is in the state, and Bayelsa has significant oil and gas operations, and crude oil was first found in commercial quantities in one of its communities.

He however reminded participants at the meeting that NCDMB was not an interventionist agency for the Niger Delta region like the NDDC and Amnesty Office and was not saddled with the developmental and employment creation responsibilities of state governments.

He added, “NCDMB is not an operating oil company like Shell and Chevron, or a servicing oil firm like Schlumberger. The Board is not exploiting any natural resource from your domain, rather we are bringing development, employment opportunities and industrialization. It is important to calibrate expectations and demands from the Board.”

He insisted that members of the host communities had a duty to support the Board’s development efforts, stressing that “capital and investments easily get threatened and would readily move away from hostile grounds to localities that are more accommodating.”

Delivering a goodwill message, the Deputy Commissioner of Police, Bayelsa State, Mr. Wilfred Afolabi commended the NCDMB for convening the interactive session and expressed hope that it would curb recurring threats of protests by certain groups against the Board for frivolous reasons. He hinted that dialogue and negotiations were the best strategies for resolving issues between corporate organisations and stakeholder groups.

In their various contributions, representatives of the host communities, including Polaku, Swali, Elebele, Emeyal I, Odioama and Okpoama commended the Board for organizing the interactive session, adding that it had closed a communication gap.

The community leaders thanked the Board for the investments in the domain, which had created employment opportunities and alleviated poverty. They maintained that Bayelsa State had become very peaceful and attractive to investments and assured that their domains would continue to enjoy peace and security. They added that members of their communities were fully committed to the completion of the projects and have been cooperating fully with the contractors.

Speaking further, they requested the Board to set up community interface committees in all the project locations and for the interactive session with host communities to be held periodically.

The leaders also solicited for capacity building and entrepreneurial training for youths in the host communities to enable them to participate fully in the value chain of the projects when completed. Some of the representatives also pleaded for employment opportunities for their youths and speedy delivery of the projects.

In his response, the Executive Secretary promised that the Board would consider the various requests and feedback and assured that qualified young persons from the host communities would be selected for trainings in key areas of oil and gas operations.