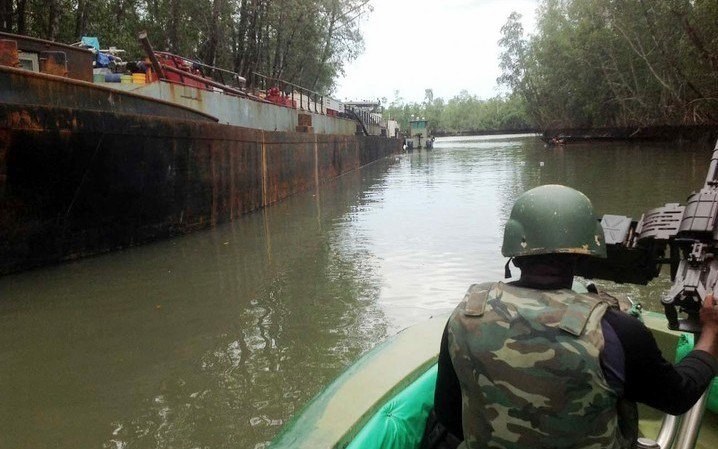 *MV Sea Express laden with some 2,500 tons of crude impounded by personnel of the Joint Task Force in the Niger Delta, Operation Pulo Shield at Okuboto Creek in Bayelsa State.

This is according to a new ‘Report by the Secretary-General on the activities of the United Nations Office for West Africa and the Sahel (UNOWAS)’ on Monday in New York.

The report, which covered from July 1, 2018, to December 31, 2018, said “Maritime crime and piracy off the coast of West Africa continued to pose a threat to peace, security, and development in the region.

“Oil-related crimes resulted in the loss of nearly 2.8 billion dollars in revenues last year in Nigeria, according to government figures.

“Between January 1 and November 23, there were 82 reported incidents of maritime crime and piracy in the Gulf of Guinea.”

The report also noted that compared to the situation reflected in the previous report, there was an increase in drug trafficking throughout West Africa and the Sahel.

“In Benin, the Gambia and Nigeria, more than 50 kilogrammes of cocaine were seized between July and October by joint airport interdiction task forces.

“During the same period, joint airport interdiction task forces seized more than six kilogrammes of methamphetamines, eight kilogramme of heroin (double the amount in the first half of 2018) and 2.6 tonnes of cannabis.

“Drug production across the region was also reportedly on the rise, with more than 100 kilogrammes of ephedrine and phenacetin seized by competent authorities,’’ the report said.

During the reporting period, it said that conflicts between farmers and herders resulted in the loss of lives, destruction of livelihoods and property, population displacements and human rights violations and abuses.

The report said outbreaks of violence were recorded in many states across Nigeria, although with more frequency in the Middle Belt region, as well as Adamawa and Taraba.

It said the spike in conflict between farmers and herders was closely linked with demographic pressures, desertification and the attendant loss of grazing reserves and transhumance routes, which had been exacerbated by climate change.

Others were challenges in the implementation of effective land management and climate change adaptation policies, and limited enforcement of existing pastoral laws.

Political and economic interests, the erosion of traditional conflict resolution mechanisms, and weapons proliferation were other factors attributed to the increased cases of herders-farmers conflict.