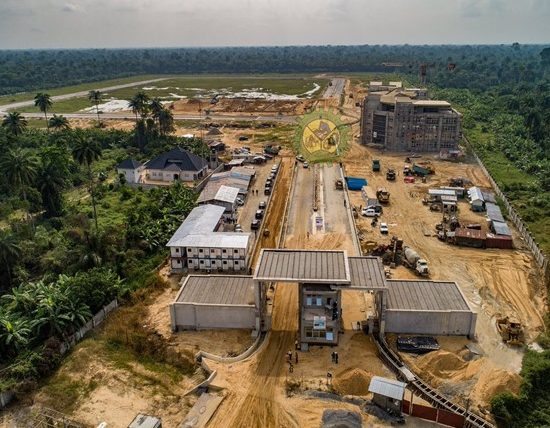 Lagos — The Nigerian Oil and Gas Park being developed by the Nigerian Content Development and Monitoring Board, NCDMB at Emeyal 1, Bayelsa State has hit 64 percent completion and would be ready by the 4th quarter of 2022, the Executive Secretary NCDMB, Engr. Simbi Kesiye Wabote has said.

He spoke on Wednesday after inspecting construction work at the project site in company of senior management of the Board.

The project started with a groundbreaking ceremony on April 27, 2018 and has now reached about 68 percent completion, with four major structures nearly completed, while foundation work was starting on some buildings and parts of the project.

According to the Executive Secretary, “we did the groundbreaking ceremony in 2018 and we were practically inside water; but today, we are seeing structures coming up. We still have a long way to go because most of the buildings are getting to the finishing stages while some are just starting. We believe that we will complete this project by Q4, 2022.”

He hinted that his assessment visit was a prelude to the planned tour by the Minister of State for Petroleum Resources, Chief Timipre Sylva to the Board’s major projects, including the oil and gas park projects at Emeyal 1 and Odukpani in Cross River State and the Composite Gas Cylinder Manufacturing facility at Polaku.

Wabote expressed delight with the quality and speed of work by the wholly Nigerian contractors.

He noted that their work compared favorably with similar jobs across Nigeria and provided evidence that the Board was always acting in accordance with its guidelines on patronage of local service companies.

The park will create a low-cost manufacturing hub that will produce equipment components and spare parts to be utilised in the nation’s oil and gas industry.

Explaining the benefit of the park scheme to the nation’s economy, Wabote hinted that the facility would stimulate the manufacturing of oil and gas components in-country and reverse the current trend whereby the sector depended on importation for most of its finished products.

The park would also save the much-needed foreign exchange for the nation and create jobs for Nigerians, he said.
“It will also enhance our capacity and bring about technological innovations because most of those manufacturing will be done here. For the community, it will create a lot of jobs and there will be a spin-off effect to other economic activities. The benefits are enormous.”

He assured that shortage of electricity would not affect companies that would set up in the park.
“We have been able to conquer the challenge of electricity at this site. We have built a 10megawatts gas plant to guaranty power to the site.”

The Executive Secretary confirmed that Shell Petroleum Development Company, SPDC was supporting the oil and gas project through a Capacity Development Initiative, CDI.

Shell’s commitment to the project included the construction of Effluent Treatment Plant, Fire Station and acquisition of two fire trucks.