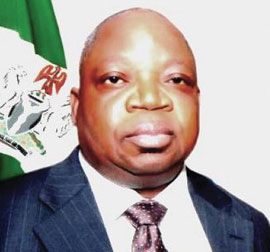 Accountant-General of the Federation, Mr Jonah Otunla made this known to reporters at the end of the technical sub-meeting of the FAAC for the month of November.

“I think we have fared very well in the Excess Crude Account, we targeted 10 billion dollars at the end of the year and I am happy to tell you that we have 9.66 billion dollars in the account.

“On percentage basis, that is about 97 per cent of our aspiration for the year,” he said.

The accountant-general also commented on the recent demand by the 36 state governors for the withdrawal of one billion dollars from the oil savings account.

He said the federal and state governments would be guided by the “principle of consensus” to resolve the matter.

“I am sure that when they table this request before Mr President, as usual a consensus will be reached,” he said.

Earlier, Otunla had told reporters that the country’s mineral and non-mineral dropped to N569.46 billion in November compared with N640.76 billion realised the previous month.

A breakdown of the figures showed that a total sum of N483.2 billion was generated as revenue from mineral resources, while N86.2 billion was derived from the non-mineral sector.

He attributed the drop to several disruptions in crude oil production and lifting operation in the Niger Delta.

He noted that during the period a Force Majeure was declared by Exxon Mobil.
Otunla said that leakage and fire outbreaks at Trans Niger, crude oil theft and maintenance work at oil terminals at Qua Iboe, Brass and Forcadoes also affected crude oil production.

Meanwhile, a total of N572.89 billion was distributed among the three tiers of government from the federation account for the month of November.

“The total distributable revenue for the month is N407.86 for statutory revenue; Value Added Tax (VAT) is N62.72 billion.

“Because our statutory revenue fell short of the budgeted figure of N467 billion, we excised 59 billion out of the ECA to augment the revenue for the month.

“So, the total revenue of N572.89 billion was shared this month (November) as against 574.94billion shared last month (October) resulting in a deficit of N2 billion,”’’ he said.

The 13 per cent mineral revenue derivation to oil producing states amounted to N41.8 in November compared with N46.2billion in October was equally distributed among the respective states.

On the NNPC indebtedness to the federation account, the accountant-general said that the corporation had continued its monthly refund of N7.6 billion for onward distribution to the tiers of government.

The News Agency of Nigeria reports that NNPC had consistently made a total of 16 payments to the Federation Account since the refund started.

The corporation still has 16 more installments to make, according to official computation from the Federal Ministry of Finance.

Also distributed to the three tiers of government in November was N35.5 billion from the Subsidy Reinvestment and Empowerment Programme, SURE-P.

SURE-P was initiated early in 2012 following the partial removal of subsidy on fuel and FAAC began transferring N35.54 billion for distribution to the three tiers of government since April.

In October, the Minister of Finance, Dr Ngozi Okonjo-Iweala, said that N30 billion had been disbursed under SURE-P for federal government projects.