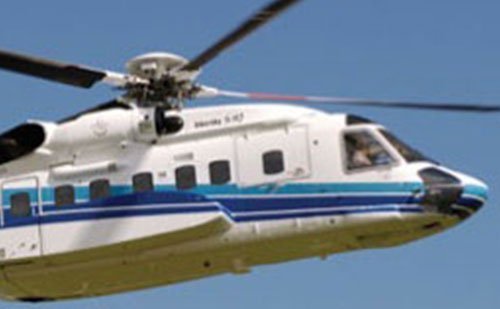 Lagos — In line with the Federal Government’s Ease of Doing Business at the port, the Nigerian Ports Authority (NPA) on Thursday recorded another feat, as the biggest helicopter in the country was received and coupled inside the PTML Terminal at the Tin Can Island Port of Lagos.

The helicopter, a Sikosky S-92 was acquired by Caverton Helicopters Nigeria Limited, shipped from United States of America.

The cargo arrived onboard a vessel; Grande Morocco on 19th of December into PTML Terminals Lagos.

Speaking with journalists shortly before the take off of the helicopter to Ikeja airport, Chief Engineer for Caverton Helicopters Nigeria Limited, Mr Sani Muhammed Amodu, said the helicopter was the biggest in the country, and because of the size, the company decided not to risk the logistics of transporting it by road.

According to him, after getting the necessary approvals, all the imported components were brought together and assembled right within the port.

“The helicopter was shipped from the United States to Lagos, but unfortunately because of the size, we could not take it out of the port to our facility because of the safety aspect of it, so what we did was that, instead of taking it out and going through the risk of the road, we decided to couple it here, following all the safety precautions as recommended by both the Nigerian Civil Aviation Authority (NCAA) as well as the Nigerian Porte Authority (NPA)

“This is the first time we are doing this through the port, we could have air-freighted it, but because of the size, we decided to bring it in through the port so that we can get the very best of service, of which we have gotten from NPA”

Whie describing features of the aircraft, Engr. Amodu said the Sikosky S-92, has 19 seats, 2 crew seats as well as an observer seat. He said the aircraft is one of the very best in the category of aircrafts for oil and gas businesses.

“The Sikosky S-92 was acquired by Caverton Helicopters being the first indigenous company in Africa to get it. Normally, all the multinational companies that have operated the machine in Africa were brought in for the sole business of making it work and taking it back, but Caverton has bought it and is going to keep it on and on to increase capability and support for oil and gas” he said

Also speaking, the NPA Port Manager, Tin Can Island Port Complex, Engr. Yunusa Ibrahim, described this as a great feat for the NPA.

Eng Yunusa stated that this was the first time this would be taking place within the terminal.

He said “Never before was an helicopter component brought to the port, assembled within the port and take off from the port, it is a very big significance for the NPA”

The NPA Port Manager noted that it would have cost Caverton Helicopters Nigeria Limited more money to move the helicopter by road, but that the port has provided enabling environment for them to assemble it.

In terms of safety, he said the NPA also monitored the assembly process which lasted four days.

On his part, General Manager PTML Terminal, Mr. Babatunde Keshinro described this as a major achievement for Nigerian ports system.

He said the fact that the terminal provided a safe and secured environment for the operation to be done is a major achievement for PTML terminal, for NPA and for Nigeria as a country where there are opportunities to bring trade for immediate value.