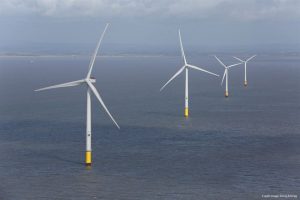 01 May 2018, News Wires – Taiwan is becoming the next battleground for the world’s top offshore wind developers as they seek a foothold in Asia for a technology that has been expanding fast in Europe.

Taiwan announced results on Monday of its first major offshore wind farm auction that aims to add 3.8 gigawatts (GW) of capacity to its existing network of just 8 megawatts (MW).

The island’s offshore wind market is expected to expand to 5.5 GW by 2025, and the government aims to invest $23 billion on onshore and offshore wind projects by 2025, law firm Jones Day says.

Taiwan is making a big push to attract investments in renewable technology as it phases out nuclear power by 2025, after the 2011 Fukushima disaster in Japan highlighted the risks of using nuclear energy in a region prone to earthquakes.

For developers in Europe, where expanding offshore wind projects particularly in the North Sea has driven down costs, Taiwan is seen as a route into Asian markets, such as Japan and South Korea, where the technology is still barely used.

“We see Taiwan as a stepping stone into Asia-Pacific,” said Matthias Bausenwein, the regional general manager for Orsted, the world’s largest owner of offshore wind power sites that was previously known as DONG Energy.

Taiwan’s auction drew bids from the world’s biggest international players, attracted by the island’s strong winds, a stable regulatory framework and the offer of 20-year power purchase agreements with a feed-in-tariff above European benchmarks.

“We have aggressive targets in Taiwan and, with things going on in China, South Korea and other markets, that amounts to it becoming the fastest-growing region globally,” said Bausenwein.

Offshore wind power is costlier than onshore projects or solar power, and still only accounts for about 3.5 percent of global wind energy capacity.

But Europe has been leading the way in using the technology, adding 3 GW last year and taking total offshore capacity to 19 GW, according to the Global Wind Energy Council.

Costs have plunged as a result. In last week’s auction in Germany, the world’s second biggest offshore wind power market, some bids offered capacity with no subsidies. In Britain, the world’s biggest market, the cost of wind power fell below new nuclear generation for the first time last year.

This has been encouraged by an expanding regional grid, greater ability to manage variable wind power supplies and the growing scale of turbines, expected to have capacity of 10 to 15 MW each in two or three years, roughly twice as powerful as today.

Taiwan is not considering firms from China, the world’s third biggest offshore market and which claims Taiwan as Chinese territory. Chung-Hsien Chen, director of the energy technology division at Taiwan’s Bureau of Energy, said Chinese bids were excluded “due to concerns of national security”.

After awarding 3.8 GW capacity on Monday, a further 2 GW will be allocated through a competitive price tender this summer. Monday’s auction had included an assessment of factors such as the amount of local content included.

European firms want local suppliers to avoid the cost of shipping bulky equipment used in the turbines from Europe.

Siemens Gamesa is working to develop the Port of Taichung as a regional hub and has signed non-binding agreements with some local partners that could provide gear locally.

“We want to produce locally because we want to be competitive,” the joint venture’s chief executive, Philippe Kavafyan, told Reuters.