on: October 21, 2019In: Community Development, featured 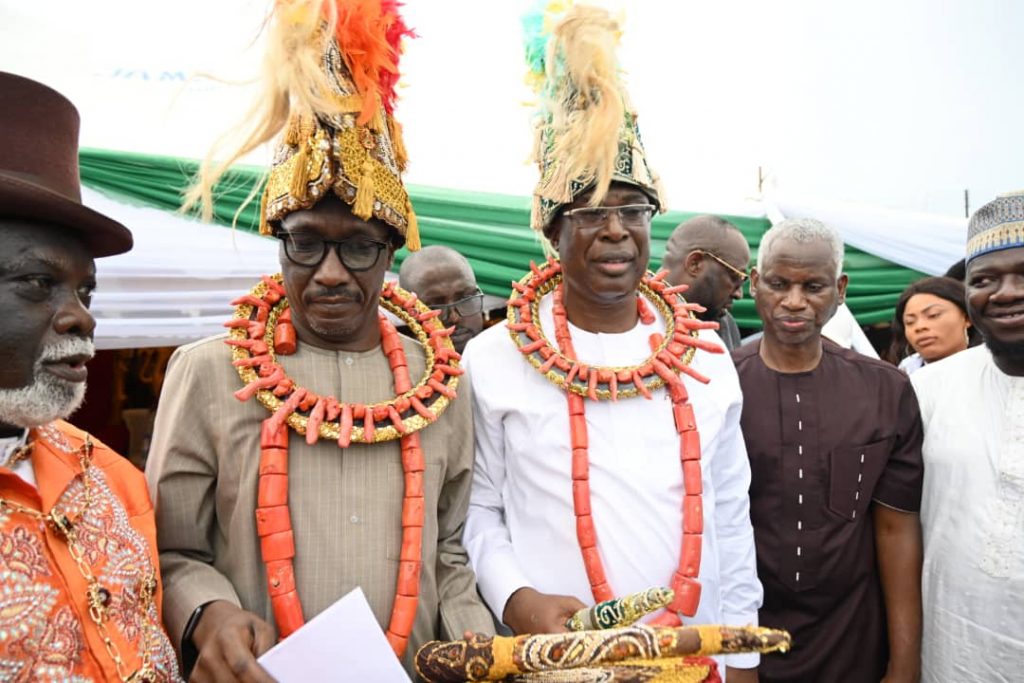 Port Harcourt — As OML25 oil and gas facilities get reopened, the Minister of State for Petroleum Resources, Chief Timipre Sylva, and the Group Managing Director of the Nigerian National Petroleum Corporation, NNPC, Mr Melee Kyari, have been awarded with Chieftaincy titles in Rivers State.

The award is in appreciation to their roles in the settlement of the over 25months protracted dispute between the Shell Petroleum Development Company, SPDC and OML25 host communities in Kula kingdom, Akuku-Toru Local Government Area of Rivers State.

While Chief Sylva was awarded the Amabelebo of Kula Kingdom, Mr. Kyari was awarded the Diepreibo I of Kula kingdom, during the Stakeholders Joint Visit to OML25 Communities and its Facilities, recently.

The Amanyanabo of Kula Kingdom, HRM Dr. Kroma Amabibi-Eleki, who awarded the chieftaincy titles to Chief Timipre Sylva and Mr Melee Kyari, also inducted the Minister and the NNPC’s GMD into the Kula Council of Chiefs, with full paraphernalia of office.

King Eleki commended the duo for their contributions in resolving the protracted dispute and bringing peace to his kingdom.

He stated that the resolution has brought to an end two years of agitatiion in his kingdom, and also commended President Muhammadu Buhari for the peace deal.

“Well, as the Amayanabo of Kula Kingdom, myself and my people are very much elated for the opening of OML25. We have suffered under SPDC for over 40years and because of that, for two years plus, OML25 was closed down.

“But the Minister of State for Petroleum and the GMD of NNPC have brokered peace between Shell and the host communities and todyOML2 has been reopened.”

Also speaking, the Amayanabo of Twon-Brass, HRM King Alfred Diete-Spiff, expressed optimism that Nigeria’s oil production will soon get to 3millionbpd especially with the reopening of the OML25 flow station and gas plants, which produces over 45,000bpd and 50millionscf of gas per day.

On the boundary dispute of OML25 oil wells between Rivers and Bayelsa State, Spiff, who was also a former Military Governor of defunct Rivers State, said the name Soku was given by SPDC, while the original name remains Oluasiri in Nembe.

“Definitely our production level should go up to about 3millionbpd, and that will be a big boost to us, especially now that Saudi Arabia has their problems, so we can now become the world’s leader in crude oil production.

“Soku, which is the name that Shell gave to the oil wells, used to be known as Oluasiri during the colonial era. It is better we all (Rivers and Bayelsa State) get together and resolve this matter amicably.”