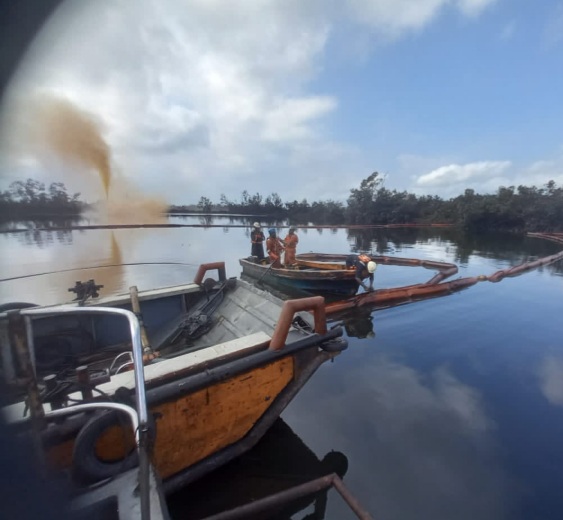 Port Harcourt — An oil wellhead at Cawthorne Channel well15 operated by an indigenous firm, Eroton Exploration and Production Limited, has suffered a blowout, spewing massive crude oil and gas into the environment.

The blowout which has been ongoing since June 15th, 2022 till date, is only similar to the blowout which occurred in OML 29 operated by Aiteo Eastern Exploration and Production, which discharged more than 100,000 barrels of crude oil for some 32 days into the Santa Barbara River and Nembe creeks in Bayelsa State

OML18, which produces and export crude through the 97 kilometer Nembe Creek Trunkline, formerly owned by SPDC, is located near the corridors of the export line within Cawthorne Channel, few metres from Bonny, Rivers State

Cawthorne Channel well15, our correspondent gathered is a dual string well which started production in May 1977; while the short string was shut-in in 1988 due to high gas oil ratio, the long string watered out and well quit in 1991, was operated by SPDC until 2015.

Confirming the incident, the Director-General of the National Oil Spills Detection and Response Agency, Mr Idris Musa,
said following the receipt of the incident report, efforts were being made to plug the leaking well head.

“The company reported and oil recovery is underway. Efforts are on to stop the source which is a wellhead,” Musa said.

As at the time of filing this report, the management of Eroton is yet to respond on the incident.

Meanwhile, a similar incident reported on Nov 5, 2021 within OML 29 operated by Aiteo Eastern Exploration and Production discharged more than 100,000 barrels of crude oil for some 32 days before the leak was plugged.

Eroton and Aiteo acquired their respective assets following the 2015 divestment by Shell Petroleum Development Company from some of its onshore assets.