PENGASSAN, TUC may down tools over kidnapped member 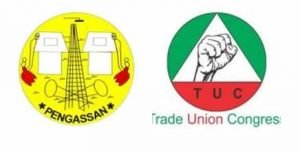 Mkpoikana Udoma
Port Harcourt — The Petroleum and Natural Gas Senior Staff Association of Nigeria, PENGASSAN, along with its mother union, the Trade Union Congress, TUC, may down tools over the abduction of one of its member from a Shell facility in Rivers State.
SweetcrudeReports gathered that the affected member, Casmir Ojobor, was abducted over a week ago, while working at Soku gas plant, operated by the Shell Petroleum Development Company of Nigeria, in Akuku Toru Local Government Area of Rivers State.
Chairman of PENGASSAN, PortHarcourt Zone, Peter Onita, told our correspondent that the association might embark on a strike if that is what would bring about  a speedy rescue of the abducted member.
Onita said that PENGASSAN at the zonal level was awaiting a directive from the central working committee for the next course of action.
“As a body, we are persuaded that the security agencies will rescue our abducted member.
“We are oil workers we do not have the power to fight the criminals so that is why we are expecting the security agencies to do their job and they have assured us that the are on top of the matter.”
Also, the Rivers State Council of the Trade Union Congress of Nigeria has condemn the abduction of the PENGASSAN member, an affiliate of the union.
TUC Secretary in Rivers State, Fortune Obi, said the only crime of Casmir Ojobor was going to work to contribute to nation building and support his family and the society.
Obi called on the Federal and State Governments to swing into action to secure hie release.
He assured that the Union will use every means at her disposal to secure the release of her member, including going on strike, should the government fail to do its primary functions of protecting the citizens.
Meanwhile, the Rivers State Police Command said they are not aware of the abduction of the oil worker.
Police Public Relations Officer in Rivers State, Nnamdi Omoni, told our correspondent that the case may not have been reported to the Police while assuring that he will make enquires on the matter.