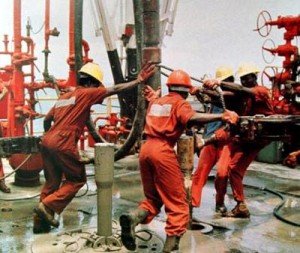 12 November 2018, Sweetcrude, Port Harcourt — Oil workers under the aegis of the Petroleum and Natural Gas Senior Staff Association of Nigeria, PENGASSAN, have called on state governors in the country who cannot pay the N30,000 new minimum wage, to resign.

PENGASSAN stated this in reaction to the claims by some state governors that they will not be able to pay the new minimum wage, citing over-bloated manpower in the civil service.

The Chairman of PENGASSAN, Port Harcourt Zone, Mr. Azubuike Azubuike, speaking to our correspondent, regretted that most state governors in the country are not creative enough to create wealth in their state.

Azubuike also maintained that most governors do not have the technical know-how to make their state economically viable to attract investors.

He accused state governors of not wanting people to be economically liberated and wondered why they (governors) were not thinking of how they can make their states self-sufficient.

According to him, “The primary responsibility of any government is the welfare and security of the people. If you cannot pay the minimum wage, then why are you there as a governor? Why are our governors not thinking?

“Most of these our governors, what was their financial status before they venture into politics? The greatest problem is that most of them are only interested in what they can get and not what they can give.

“There is nothing like over bloated manpower in the civil service, the problem is that most of our politicians do not have the interest of Nigeria at heart.

“How many Senators and how many House of Representatives members do we have in this country? How much are their salaries and allowances? If they can be able to block the wastages, we will have enough to even pay more than N30,000 and still have enough to develop the state.”

PENGASSAN also assured that the organised labour will make it uncomfortable for governors who fail to pay the new minimum wage of N30,000 when the bill is eventually passed into law.

“If the National Assembly refuses to pass the new minimum wage, I can assure you that the organised labour will do everything legally possible to ensure that this country is brought to her knees.

“We cannot continue to foot the bills of very few in government, while the majority of the people are dying in poverty. When workers are paid, it translates to empowerment and people will be able to meet their needs.”