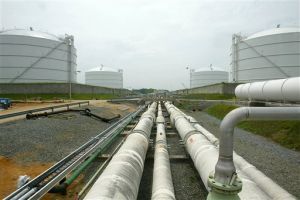 12 May 2013, WASHINGTON (AP) — A domestic natural gas boom already has lowered U.S. energy prices while stoking fears of environmental disaster. Now U.S. producers are poised to ship vast quantities of gas overseas as energy companies seek permits for proposed export projects that could set off a renewed frenzy of fracking.

Expanded drilling is unlocking enormous reserves of crude oil and natural gas, offering the potential of moving the country closer to its decades-long quest for energy independence. Yet as the industry looks to profit from foreign markets, there is the specter of higher prices at home and increased manufacturing costs for products from plastics to fertilizers.

Companies such as Exxon Mobil and Sempra Energy are seeking federal permits for more than 20 export projects that could handle as much as 29 billion cubic feet of natural gas a day.

If approved, the resulting export boom could lead to further increases in hydraulic fracturing, a drilling technique also known as fracking. It has allowed companies to gain access to huge stores of natural gas underneath states from Colorado to New York, but raised widespread concerns about alleged groundwater contamination and even earthquakes.

The drilling boom has helped boost U.S. natural gas production by one-third since 2005, with production reaching an all-time high of 25.3 trillion cubic feet last year, according to the U.S. Energy Information Administration.

In recent months, however, production has begun to level off as the glut of natural gas keeps U.S. prices down. In response, producers have begun pushing to export the fuel to Europe and Asia, where prices are far higher.

Approval of all the projects currently under review by the Energy Department could result in the export of more than 40 percent of current U.S. production of liquefied natural gas, or LNG, which is gas that’s been converted to liquid form to make it easier to store or transport.

The prospect of a major expansion of U.S. gas exports has tantalized business groups and lawmakers from both parties, and they’re urging the Obama administration to move faster to approve the projects as a way to create thousands of jobs and spur economic growth. Increased exports also would help offset the nation’s enormous trade deficit.

But consumer groups and some manufacturers that use natural gas oppose expanded exports, saying they could drive up domestic prices and make manufacturing more expensive. Many environmental groups also oppose LNG exports because of fears that increased drilling could lead to environmental damage

“LNG exports are a huge opportunity for the United States economy, our workers and our geopolitical relationships” with countries such as Japan that are seeking to import natural gas, Cooper said. “LNG exports will create jobs, increase government revenue and benefit consumers.”

The administration has not said whether it will approve the projects. The issue is among the main challenges for Ernest Moniz, President Barack Obama’s nominee to be energy secretary.

Federal law requires the Energy Department to determine that projects are in the public interest before granting export permits to countries that do not have free-trade agreements with the U.S.

Moniz, a physics professor and former top officials at the department in the Clinton administration, is widely seen as sympathetic to the natural gas industry. At a Senate hearing last month, he called the “stunning increase” in natural gas production a “revolution” that has led to reduced emissions of carbon dioxide and other gases that cause global warming.

A recent study commissioned by the department concluded that exporting natural gas would benefit the U.S. economy even if it leads to higher domestic prices for the fuel, as is likely.

Michigan-based Dow Chemical Co. and other manufacturers have criticized that study, saying it relied on 2-year-old data that doesn’t account for increased demand for natural gas by manufacturers, trucking fleets and power plants.

Dow, which uses natural gas to power its plants and make products from plastics to pharmaceuticals, has argued against unfettered exports and said that could lead to price spikes that could harm the U.S. economy.

But John Felmy, chief economist for the American Petroleum Institute, the largest lobbying group for the oil and gas industry, said restricting trade to control prices “is bad for the economy” and could result in lower domestic investment and production, hampering jobs and economic growth.

“We cannot and should not build around a wall around United States,” Felmy said.

Whether to approve natural gas exports is “a huge question that’s facing the federal government right now,” said Sarah Ladislaw, an energy analyst at the Center for Strategic and International Studies. Expanded exports not only could raise natural gas prices, but also could hinder development of renewable forms of energy such as wind and solar power that do more to combat climate change, Ladislaw said.

“How do you put yourself on a pathway to reduced (carbon) emissions over the longer term while not killing this golden goose which is providing low-cost energy to the United States right now?” Ladislaw asked.

Natural gas results in fewer carbon emissions than other fossil fuels such as coal or oil, but still leaves a significant carbon footprint. Environmental groups also worry that more fracking could harm drinking water supplies or cause other problems.

Kevin Book, an analyst for ClearView Energy Partners, a research and consulting firm, predicted that the administration will approve some new exports, but nowhere near the 20 projects that are pending before the Energy Department.

“Everything we see from the administration suggests they embrace the idea of a small first-allocation” of LNG export permits, Book said. “They are looking for some subset to test the market.”

U.S. officials also must consider competition from countries such as Canada and Australia, where new LNG export terminals also are being proposed. The facilities cost billions of dollars and take years to complete.

Only one U.S. license has been granted so far, to Houston-based Cheniere Energy Inc. for an export terminal in Louisiana’s Cameron Parish. Proposals to build plants from Maryland to Texas and Oregon are pending from energy giants such as Exxon Mobil and Conoco Phillips, as well as Virginia-based Dominion Resources Inc. and Canadian-based Veresen Inc.

The Energy Department has promised to decide on a case-by-case basis, but must finish wading through nearly 200,000 comments filed on a study last year that concluded more exports would translate to net economic benefits for the U.S.

Under the right approach, energy companies can “make enough money to continue producing, U.S. manufacturers have an affordable, stable supply of natural gas, and the environment is not only protected, but actually benefits from greater use of natural gas and lower CO2 emissions,” Wyden said.
*Matthew Daly, Associated Press