The call was made during a peaceful protest in Lokoja, the Kogi State capital by women and youths from coal mining host communities, against the activity of both legal and illegal coal mining and its effect on communities in the State. 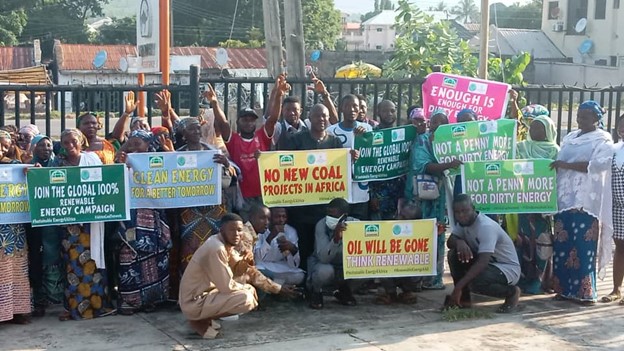 The protesters with placards and banners with different inscriptions such as “enough is enough for dirty energy,” “no new coal project in Africa” marched from Lokogoma to Kogi State Government secretariat, demanding for an end to dirty energy and environmental degradation.

Speaking, the Executive Director of SERDEC Mr Tijani Abdulkareem, lamented that coal mining in Kogi State had led to extensive environmental degradation in the commumities and called for urgent environmental audit of coal mining sites in the state.

Abdulkareem harped on the need for the federal government to diversify fossil fuel production to renewable sources of energy, saying that investments in renewable energy would end Nigeria’s energy crisis and boost entrepreneurial development in the country.

He said the protest was imperative, as the group had conducted focused group discussion and baseline surveys in the affected communities which revealed the environmental and human rights violations ongoing in communities where coal mining was taking place.

Some of these communities according to him, are Ankpa, Ojoku, Odagbo and Onupi in Ankpa Local Government Area of the state, adding that the group would take the protest to the National Assembly and other relevant authorities.

“Coal mining in Kogi State had led to extensive environmental degradation including the contamination of community airspace, water and soil leading to health, insecurity and livelihood challenges for local communities.

“We urge the government to carry out an environmental audit of coal mining sites in Kogi State, investigate human rights violations perpetuated in host communities and violation of undocumented community development agreement entered into by companies carrying out coal mining activities within the host communities.

“We also urged the government to diversify from fossil fuel production to renewable sources of energy; Africa has the richest solar resources of any continent but with less than one percent of the world’s total installed solar power capacity, this has affected industrialisation and SME development.