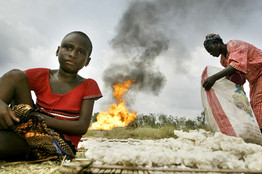 19 June 2012, Sweetcrude, LAGOS – THE Royal Dutch Shell Plc (RDSA), operator of Nigeria’s largest oil fields, said the flaring, or burning, of natural gas at its deposits in the West African country fell by more than 60 percent in the past nine years.

“Flaring dropped by more than 60 percent from over 0.6 billion cubic feet of gas a day to about 0.2 billion cubic feet,” the company said today in an e-mailed statement from Lagos, the commercial capital. The decline followed investments of more than $3 billion to build gathering facilities since 2000, Shell said.

Nigeria, holder of Africa’s largest gas reserves of more than 187 trillion cubic feet, flares most of the fuel it produces along with oil because it lacks the infrastructure to process it. Shell has 17 gas projects, including the integration of the Forcados oil and gas development, which will start in the first quarter to 2015, the company said on its website. The projects will cost $6 billion when completed, it said.

About 45 percent of Nigeria’s domestic gas demand is provided by Shell, most of which is used to generate electricity in Africa’s most populous nation. Chevron Corp., Exxon Mobil Corp., Total SA and Eni SpA are the other major suppliers.