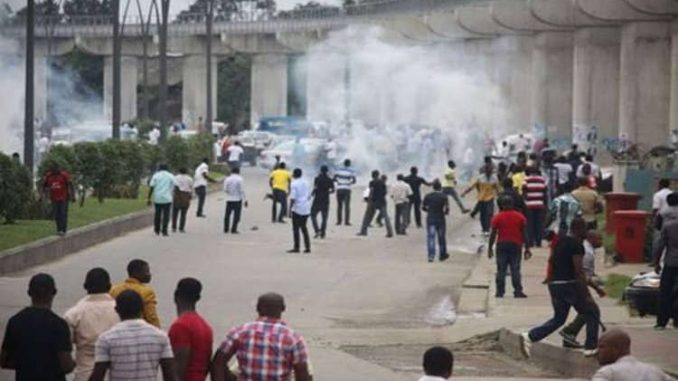 Lagos — There was sporadic shootings at Mile Two, on the Badagry expressway, Lagos, Wednesday night, from armed men suspected to be members of the National Union of Road Transport Workers, NURTW who invaded the motor park of members of the Road Transport Employers Association of Nigeria, RTEAN.

An earlier attack on Tuesday reportedly left 15 RTEAN members with gunshot wounds, at the Tin-Can First gate and Fatgbems Gas station on the Apapa/Oshodi expressway.

It was gathered that trouble has been brewing over the past two months until it reached its climax on Monday.

Information at Vanguard’s disposal revealed that the cause of the fight was over ticket fee for truck drivers access into Apapa Port.

Before now, RTEAN, as gathered issued ticket to its members who are truck drivers, at N800. However, NURTW was said to have forced its way into the toll collection from truck drivers. In the process, it (NURTW) increased the price to N2000.

But RTEAN was said to have kicked against NURTW’s involvement, as it argued that former had never been part of the toll collection from onset and that truck drivers were members of RTEAN.

Along the line, the Lagos State Government waded by ordering the stoppage of issuance and collection of ticket and money by either of the transport unions.

It was however, gathered that the toll collection continued unabated , until the argument between the warring parties, assumed a violent dimension.

Speaking on the invasion of its park on Tuesday night, Vice Chairman of RTEAN in Lagos State, Comrade Adeola Adeyemi said, “As I speak to you, I am at Area ‘E’ Festac, to incident the murder case against members of the NURTW.

“I have also officially written to the Special Assistant to the Lagos State Governor on Transportation, Mr. Toyin Fayinka, on the attack. We are still waiting to hear from him.”

Part of the petition to Fayinka reads: “ I write to officially brief you about the incessant attacks on my life, business and Union by NURTW members under the leadership of the Chairman NURTW Branch ‘C’, Amuwo Odofin, Prince Ajele Abebi Abayomi, aka ‘Ikomodina’.

“I am a man of dual role a legitimate truck owner who own 15 trucks and a bonafide RTEAN member.

“On Wednesday, October 13, 2021 at about 9:15 P.M NURTW members again launched another attack on RTEAN Truck Park Mile -2 killing three and injuring 30 people with guns and machetes.

“Based on the attacks, I seek the prompt intervention of the Lagos State Government through the Ministry of Transportation and Office of the Special Adviser to the Governor on Transportation in finding a lasting solution to the attacks by NURTW members”.

Efforts to reach NURTW branch chairman, Ajele, proved abortive as calls made to his mobile phone were neither answered nor were text messages sent, responded to.

Another attack was foiled by the Police yesterday, as they fired tear gas canisters to disperse some hoodlums who gathered at Mile-Two.

Special Assistant to the Lagos State Governor on Transportation, Mr. Toyin Fayinka disclosed that he was aware of the incident between both unions. He informed that he had called for a meeting with all parties involved..

Fayinka stated: “I am aware of the incident and I have called for a meeting of all the parties involved and this include the State Police Commissioner and Commander, Area ‘M’ . I have directed that all issuance of ticket and collection of fees from vehicles and trucks be stopped forthwith”.