Lagos — TRANSPORTERS in Lagos have concluded plans to down tools today to protest multiple extortion of drivers by officials of the Lagos State Traffic Management Authority, LASTMA, Nigerian Ports Authority, NPA and the Nigerian Police. 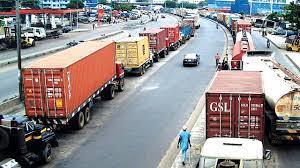 *Trucks on the Apapa/Oshodi expressway

Speaking to Sweetcrudereports on the planned protest, Comrade Hassan Adekoya, Chairman Lagos Task Force of the National Association of Road Transport Owners, NARTO, State said that the high level of extortion has become unbearable as most transporters are closing shops and running out of business.

Adekoya also said that officials of LASTMA came into Apapa to arrest trucks carrying export cargoes thereby disrupting exports, which are billed to be loaded onto waiting vessels.

He stated: “Transporters will shut down Lagos on Monday (today) over LASTMA extortion and brutality of drivers, trailer drivers will withdraw their services.

“The placards and banners are ready for the protest. There will not be any form of movement on Monday.

“They are protesting the Electronic call system which they have described as a fraud. We pay as much as N35, 000 to N37, 000 to ‘ETO’ before any truck driver can access the port.

“Under normal circumstances, ‘ETO should not attract a fee of not more than N1, 000 couple with the cost of Diesel which is going for as much as N1, 000 per litre.

“The ticket of ‘ETO’, what is it for, if it is not fraud, the whole of Apapa road is bad, trucks are falling, transporters are losing their trucks to the bad roads every day. What value is ETO adding to the system?

“These are grievances of all the transporters, because of the situation; most transporters are selling their trucks now and it LASTMA and NPA officials that are buying these trucks.

“Extorters have money; the transporters do not have money.”