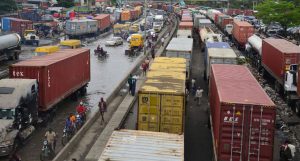 *Trucks on the Apapa/Mile-2/Oshodi expressway

Lagos — The introduction of the electronic call-up system has drastically reduced truck turnaround time at the Lagos ports by 70 percent and the cost of transporting containerised cargoes within the Lagos metropolis by 60 percent.

This is according to the management of Transit Truck Park, TTP, operating the call up system.

Operating Officer of TTP, Mr. Dayo Adeboye, while speaking to newsmen in Lagos, said that though hitches were being experienced at the Mile-2 end of the Apapa-Oshodi expressway due to ongoing construction work there, the system had registered considerable success so far.

and yet to be coordinated call up system for tankers.

Adeboye also said that before the intervention of TTP in the management of the movement of vehicles in and out of the Lagos ports, the average turnaround time for Reefer Trucks was two weeks but that it has been reduced to 60 hour which is 2 and half days.

For the cost of moving a 40 feet container from Apapa port to any warehouse or location within Lagos metropolis, it used to cost about a N1million, but this has this has reduced to N400,000, representing a 60 percent decrease.

Adeboye explained that on a daily basis, about 4,000 trucks were on the port access roads and adjoining streets within and around the Apapa area, saying most of these have been moved into truck parks scattered around Lagos.