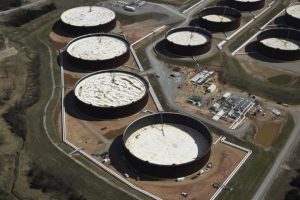 Crude inventories fell by 10.8 million barrels in the week to July 19, compared with analysts’ expectations for a decrease of 4 million barrels. That followed an 11-million-barrel draw reported by the American Petroleum Institute, which releases its data on Tuesdays.

“The big drawdown is probably an indication of things to come. I think we’re starting to see the impact of the OPEC production cuts, strong demand, and it’s starting to show up in the numbers,” said Phil Flynn, analyst with Price Futures Group in Chicago.

“The market is hesitant to overreact to these numbers. The bearish case for oil continues to be concerns about a slowdown in the global economy.”

Crude stocks at the Cushing, Oklahoma, delivery hub fell by 429,000 barrels, EIA said. Production in the United States was down sharply, dropping to 11.3 million bpd from 12 million bpd a week earlier, owing to the shut-ins by offshore facilities due to Hurricane Barry.

Gasoline stocks fell by 226,000 barrels, compared with analysts’ expectations in a Reuters poll for a 730,000-barrel drop.

Distillate stockpiles, which include diesel and heating oil, rose by 613,000 barrels, versus expectations for a 499,000-barrel increase, the EIA data showed.