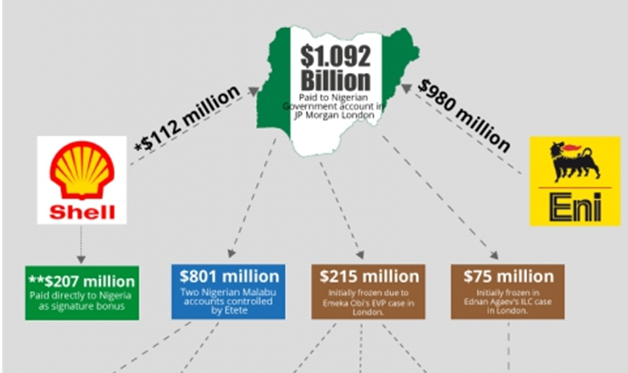 London — Royal Dutch Shell and Eni won dismissal of a $1 billion UK lawsuit brought against them over allegations they knew about bribes in a Nigerian oil deal.

A London judge ruled Friday that England has no jurisdiction to try the case as it involves the same essential facts as a separate Italian criminal case.

The ruling is a victory for the oil companies, which have been clouded by accusations in a years-old dispute over exploration rights to a tract in the Gulf of Guinea called Oil Prospecting License 245 that has spread to courtrooms throughout Europe.

“We maintain that the 2011 settlement of long-standing legal disputes related to OPL 245 was a fully legal transaction with Eni and the Federal Government of Nigeria, represented by the most senior officials of the relevant ministries,” Shell said in a statement.

The Nigerian government said in its own statement that the Italian criminal case has a completely separate legal basis from the U.K. civil case and it would seek permission to appeal.

Eni declined to comment.
The ruling does not affect ongoing Italian criminal proceedings, where Nigeria has a separate legal claim.