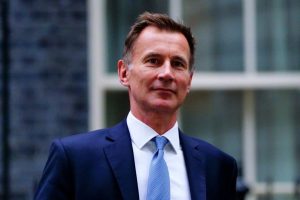 London — British finance minister Jeremy Hunt said on Thursday the government would increase a windfall tax on oil and gas firms and extend it to power generation firms as he seeks to raise money to plug a major hole in public finances.

The measures were among a string of tax increases and tighter public spending in a tough budget plan announced by Hunt in parliament.

Soaring oil and gas prices in the wake of Russia’s invasion of Ukraine have sent household energy bills to record highs, triggering Britain’s worst cost of living crisis in generations.

Hunt said the levy on oil and gas companies would be increased to 35% from its current rate of 25% and extended until the end of March 2028. This brings the total tax on the sector to 75%.

The windfall tax will be expanded to electricity generators with a levy of 45% being applied from Jan. 1 to revenues the government deems “extraordinary”, from low carbon power generators such as wind and nuclear.

The two measures are expected to raise around 14 billion pounds for the 2023/24 fiscal year, a treasury document showed.

Shares in British renewable power generators SSE (SSE.L) and Drax (DRX.L) had risen around 2% and 5.6% respectively by 1530 GMT as analysts said the tax was less onerous than feared.

SSE said a well designed levy on extraordinary profits was a reasonable measure.

“The level of certainty which comes from the announcement this afternoon will be welcomed,” said Shah Jahan Khandokar, partner at law firm McDermott Will & Emery.

Shares in Centrica, which owns oil and gas production assets, 20% of Britain’s nuclear fleet and Britain’s largest energy supplier British Gas, were up around 6%.

Currently the cost of producing electricity from gas-fired power stations is usually the benchmark for setting the wholesale electricity price that helps to determine how much people pay for their energy.

This means generators of renewable and nuclear plants can benefit from high wholesale prices.

Treasury documents show the 45% tax on low-carbon power generators would apply to revenue made on power generation at an aggregate price over 75 pounds per megawatt hour (MWh).

The higher windfall tax on oil and gas producers will take effect on Jan. 1.

“We see the outcome as being less investment, lower UK oil and gas production, higher carbon intensity, worse energy security, fewer jobs, and higher energy costs; the UK remains run by the short term for the short term,” analysts at brokerage Stifel said in a note.

Jefferies analysts, however, said that the extension of the tax’s timeframe to 2028 from the end of 2025 was shorter than initially expected.

Shares of Harbour Energy, the largest North Sea producer, were down 4.5% while those of newly-listed Ithaca Energy were down 2.5%.

Shell said in response to the announcement that “the energy sector needs to have confidence that there will now be a stable investment climate following a period of considerable uncertainty”.

BP previously said it will pay 2.5 billion pounds in tax in Britain this year under the 25% windfall tax.

The government said that it will reduce its investment allowance plan for spending on new oil and gas extraction to 29% of all investment expenditure.