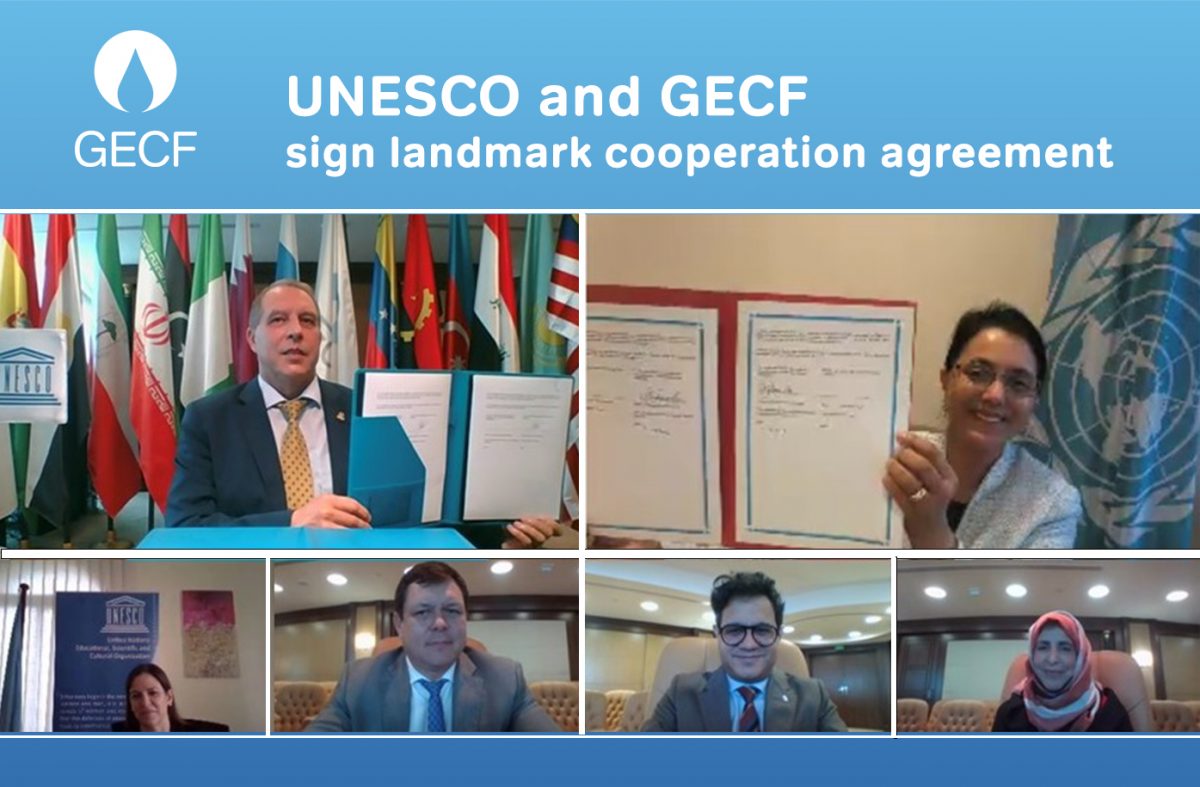 *Clockwise from top left, HE Sentyurin and HE Nair-Bedouelle hold up the signed copies of the MoU as officials from UNESCO regional office and the GECF Secretariat look on.

Doha, Qatar — Marking a victory for science and education, United Nations Educational, Scientific and Cultural Organisation (UNESCO) and the Gas Exporting Countries Forum (GECF) today signed a Memorandum of Understanding (MoU) to bring the benefits of collaboration to the world at large.

The agreement, taking stock of two years of cooperation, was signed by HE Shamila Nair-Bedouelle, the Assistant Director-General for Natural Sciences at UNESCO and HE Yury Sentyurin, the Secretary General of the 20-member coalition of the leading gas exporting countries of the world. The MoU will serve as a gateway of opportunities between the two entities in the areas of struggle against climate change, natural resources management, and positive developments across the globe, particularly in the Africa region. The partnership will further allow the sides to focus on capacity building, technical support, and shared expertise.

Both signatories commended the UNESCO Cluster Office for the GCC and Yemen (accredited to Doha) for facilitating the agreement.

“The mobilisation of science for the benefit of society and the planet is now more urgent than ever. We need science and technology, we need access to science and technology, we need to be able to reduce the knowledge gap between different countries across the world, and therefore this partnership with the GECF is really a beacon of hope and light,” said HE Nair-Bedouelle following the virtual signing ceremony.

“The GECF serves as a platform for the science policy interface, underpinning the importance of the exchange of scientific knowledge, experience, and dissemination of information through research and production of global outlooks and statistical bulletins. We at UNESCO are therefore confident that this partnership will further harness the potential of science and technological cooperation to address global challenges, through advocacy and awareness raising at all levels of society and economic sectors towards achieving the sustainable goals of the 2030 Agenda and beyond,” she added.

Scientifically-grounded data and insights are championed at the GECF, whose Secretary General emphasised that technology is key to the envisaged energy transition and climate action such as greenhouse gasses (GHGs) emissions mitigation. The Forum’s speaker added, that “education and science-oriented exercises play a great role in environmental protection with a view to raise awareness and cultivate a “culture of energy responsible behaviour” or “energy scholarship.”

“The GECF is developing technologies, including ones in relation to reduction of GHGs emissions through the GECF Gas Research Institute, recently established in Algeria, and fully dedicated to discovering new technologies and innovations to achieve the ambitious sustainable development goals in front of us,” said HE Sentyurin.

“The GECF’s ambition to steward the gas industry into playing a greater role in environmental protection manifests in our Environmental Knowledge and Solutions initiative. This 12-point agenda focuses on many aspects of our activities,” he added, while referring to the 2019 Malabo Declaration adopted by the GECF Heads of State and Government, which calls on the Forum to use natural gas as the core source of energy in the development programmes and climate change policies of developing countries, such as in Africa, to overcome energy poverty and to mitigate CO2 emissions.

The MoU has been signed against a unique backdrop. The world’s overall energy demand is assumed to grow along with the global economy and population growth. The GECF experts forecast that in order to fulfil this increased demand, the world will likely see a symbiosis of conventional and renewable energies to solve climate issues and to meet the needs of nations for affordable energy. Natural gas is expected to shoulder the bulk of this demand on the back of its attributes of being the most environmentally friendly, affordable, flexible, and abundant fossil fuel.

According to the latest available figures from the GECF Global Gas Outlook 2050, natural gas is projected to become the largest source of primary energy by 2050, from currently 23% to 28%. Along the way, natural gas is expected to play a vital role in decarbonisation options including natural gas-based hydrogen, also known as the blue hydrogen, with carbon capture, utilisation and storage (CCUS) technologies.

The Forum’s Secretary General termed the GECF’s sustainability-related efforts as a “duty to the world”, given that its members collectively represent 71% of the world’s proven natural gas reserves and nearly half of its marketed production.

As an observer organisation to the UNFCCC (UN Framework Convention on Climate Change), the GECF actively participates in the conference of parties, with the most recent statements made at COP24 and COP25. The Forum is also a regular contributor to the discussions of the UN Economic Commission for Europe (UNECE) Group of Experts on Gas, where it analyses natural gas’ leading role in attaining the 2030 Agenda for Sustainable Development.

“This is complemented by our rapidly growing relationships with the G20, BRICS, and others in the spirit of joint action as regards to humanity’s shared mission of sustainable development,” concluded HE Sentyurin.