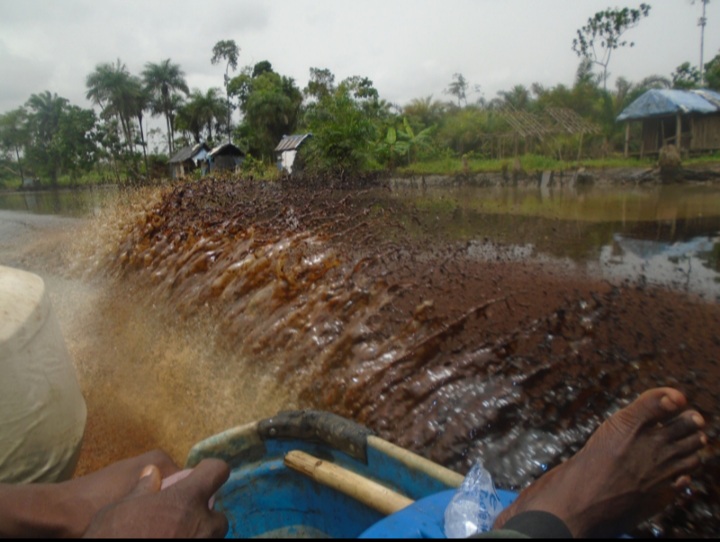 The spill, which was first noticed on the 3rd of February 2022, continued for over a month and was eventually clamped by Agip on March 18th; though Agip might have shut down the line, which does not automatically stop crude oil from spewing, but only lower the pressure on the line and volume spewed into the environment.

A fellow up visit to the impacted communities reveals that all the fishing settlements along the Nun River have been deserted, as a result of the spill, as the peasant fishermen can no longer cast their fishing nets, due to heavy presence of crude oil covering the creek leading to the spill sites, riverbanks, including vegetation.

Meanwhile, there has been no signs that Agip tried to contain the crude oil from spreading, no signs of booming materials anywhere in the creeks laden with crude oil; as heavy volume of crude spreads on the creeks and rivulets, emptying into the River Nun and heading towards the Ocean at ebb tide, dead fishes and crabs float with the crude oil. 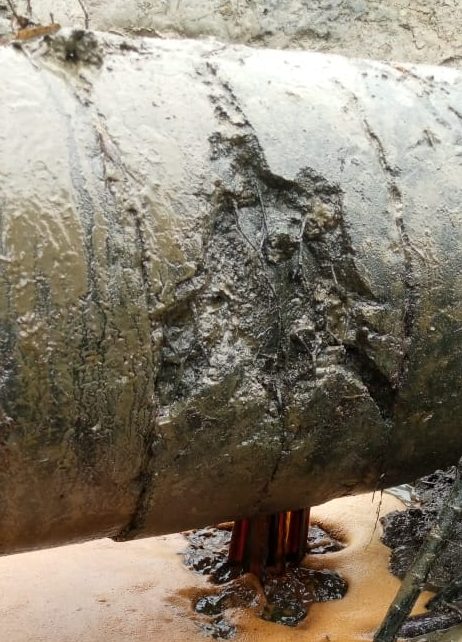 *The ruptured pipeline leaking from a six O’clock position

Narrating the predicament of the people, the General Secretary of Lasukugbene, Mr Valiant Jackson, explained that since Febrary 3rd when the oil spills occurred, Agip has not been to the community or identify with them, but only sent contractors to clamped the leaking pipeline.

Jackson said the leaking pipeline was laid by Agip in the early 1970s, regretting that since then till now, the community has not benefitted anything from the Italian firm apart of incessant cases of oil spills, while lamenting that the spill has affected their source of drinking water and means of livelihoods.

He charged the government to call Agip to order, saying that Agip’s act of negligence should attract some penalty from regulators of the industry, as operators cannot self-regulate.

“The delay in responding to these spills by Agip speaks volume; as an act of irresponsibility and environmental racism; because Agip/Eni cannot do such in Italy or Rome. Sometimes security concerns are put forward as excuse; but in this particular case there was nothing like security threat to any staff or contractor.

” It has not been easy with us and, that is why we are of the view that government should intervene; prevail on Agip and send us relief materials immediately before going ahead with other things. What is happening is not in our favour, it is not good for us. We are begging because we don’t have power to contend with Agip; that is why the government should come in.

“Now, due to this oil spillage from Agip pipeline that has damaged the environment in Lasukugbene, people have deserted their fishing camps and are now idling in the community. And Agip has not visited the community since this incident. What I’m saying here now is, let Agip come and remove their pipeline; because this has become a recurring decimal. We are tired.

“This has been happening repeatedly and they always attribute the cause to sabotage; but this one even Agip has confirmed that it is equipment failure, that their pipeline caused the problem. In terms of benefits, there is no person from our community that is engaged by Agip even as a contractor, not even as a cleaner. We don’t have light, potable water; nothing. Agip is just suffering us.

“The magnitude of oil crude oil spewed into the environment cannot even be compared to what happened at the Aiteo OML 29 Santa Barbara Well 1. Yet, not a single staff of Agip has visited Lasukugbene to identify with the people; no relief materials of any kind, nothing. As always, they pass through the back door to come and do clamping.”

Meanwhile, though a JIV was yet to be conducted, the Chairman of Agip sponsored Igbumotoru/Peremabiri Cluster Development Board, Mr Solomon Suobo, said the cause of spill has been attributed to equipment failure, assuring that Agip has promised taking care of relief materials later.

However, the Environemntal Rights Advocate/Friends of the Earth Nigeria, has said that courtesy demands that Agip visits the community promptly and show concern, as its host community heavily impacted negatively by the company’s operations.

Alagoa explained that Aiteo did not wait until the Santa Barbara Well 1 spill stopped before visiting Nembe with relief materials, and wondered why NAOC should be dealing with such serious issues like a ‘’master/servant’’ relationship with her host communities?

“NAOC should take immediate steps to prevent crude oil from spreading to the River Nun. The current free spread is unacceptable. Agip should activate actions for proper cleanup of all impacted sites without delays. Adequate compensation for specific and general damages should be paid to all affected individuals and communities.

“Cleanup should be followed immediately with remediation with a view to restoring the badly impacted marine environment/ecosystem. Once again, the Federal Government should initiate the UNEP recommended cleanup in Ogoni to other impacted environment of the Niger Delta.

“The industry regulators should rise to the occasion and ensure proper cleanup and remediation are carried out by NAOC. The usual practice of not revisiting spill impacted sites to confirm the needful should be a thing of the past. Leaving impacted communities and victims alone to contend with polluting oil companies is not desirable of regulators.”