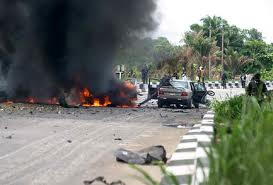 15 August,2011,Sweetcrude, WARRI – MORE than a year after the Warri Bomb blast that rocked Government House, Annex, Warri, Mr. Faith Igiogio, one the victims of the unfortunate incident has appealed to the Delta State Governor, Dr. Emmanuel Uduaghan to come to his aid.

Mr. Igiogio whose car was ripped -off by the blast set by some members of the defunct MEND who wanted to scuttle the peace program organised by Vanguard Media Limited, was driving along the busy Ugbuwangue/NPA Express way with five other passengers when all of a sudden his car was ripped apart by one of the bombs.

The 45 years old taxi driver was rushed to the General Hospital Warri and after spending over a hundred thousand naira there, he was later taken to a private Medical Center where he also spent over 80 thousand naira on drugs and treatment.

Mr. Igiogio is now jobless as his only source of livelihood, his taxi, has been destroyed by the bomb blast and has therefore appealed to the state government to come to his aid as he could no longer feed his family.

While narrating his story to Vanguard in Warri, Mr. Igiogio said: “I was on a trip from okere Market to Ubeji on the 15th day of March 2010 at about 11am, just as by the Government House, Annex, along DBS/CHEVRON expressway, all of a sudden I heard a heavy sound blast which picked up my car and the five passengers inside and batched us back by the side with other cars parked along the side of the express way.”

According to the doctor’s report made available to Vanguar, Mr. Igiogio was made to deposit #30 thousand and a balance of #40 thousand naira as the case progress.

“On examination, he was conscious and alert and stable. He had multiple injuries on his head, neck, face, ear and left hand with severe haemorrhage. The bleeding was arrested, and about seventeen stitches where given,” the report stated.