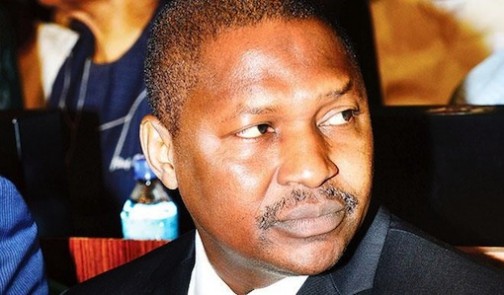 Oscarline Onwuemenyi
27 October 2017, Sweetcrude, Abuja – The Federal Government appears to be making some headway in the Malabu Oil deal investigations, as it announced on Thursday that it has recovered $85million from the United Kingdom as part of the stolen funds from the controversial deal.

The Attorney General of the Federation and Minister of Justice, Mr Abubakar Malami, who made the announcement during a consultative meeting on assets recovery in Abuja, however, decried the non-compliance attitude of some countries that are still holding on to stolen assets.

Malami reiterated the resolve of the government to recover more funds, having signed several treaties to facilitate the return of stolen assets.

The Malabu oil transaction started in 1998 when the military administration of General Sani Abacha came up with the policy of encouraging indigenous participation in the upstream sector of the oil and gas industry.

Oil blocks were allocated to indigenous companies at a reduced signature bonus of $20 million.

Signature bonus is a one-time fee for the assignment and securing of a license, paid irrespective of economic success for the contractor or licensee.

Malabu Oil and Gas Limited was allocated OPL 245 and they made a part-payment of $2 million for the signature bonus and brought in Shell as technical partners, but the deal was consummated in 2011 when Jonathan was in power.

Some of the key persons that have been involved in the deal are Gen. Abacha, who was head of state from 1993 to 1998; Mohammed Abacha, son of the former head of state; Hassan Hindu, wife of Hassan Adamu, the Wakili Adamawa and one time Nigeria’s ambassador to the United States, former President Olusegun Obasanjo, Chief Dan Etete, his minister of petroleum resources; former President Goodluck Jonathan, Shell, Eni, Mohammed Adoke, minister of justice under Jonathan, and the Corporate Affairs Commission (CAC).

The sale of OPL 245 to Malabu was nullified by Obasanjo in 1999 and assigned to Shell — without a public bid. Ownership was later reverted to Malabu thereafter, leading to legal action by Shell. The company later resorted to negotiating directly with Etete after Jonathan assumed office in 2010.

In 2001, the federal government revoked OPL 245 from Malabu, whose beneficial owner was Etete. As minister of petroleum, the oil block was awarded to Malabu in 1998. The administration of Obasanjo then invited some international oil companies (IOCs) to bid for the block. Shell participated and won the bid.

Malabu petitioned the house of representatives which then conducted a public hearing into the transaction and concluded that the revocation of the block from Malabu and reallocation to Shell was done mala fide (in bad faith) and declared it null and void. It, therefore, passed a resolution that the block should be returned to Malabu.

Government did not comply with the resolution of the green chamber, so Malabu went to court and there was a series of litigation between Malabu and the government until sometime in 2006 when they entered into an out-of-court settlement which was subsequently reduced to a consent judgment of the federal high court, Abuja.

As a result of the agreement and all the conditions set out to be met by all parties, Edmund Daukoru, who was then the minister of state for petroleum resources, wrote on behalf of the federal government, and on behalf of Obasanjo to convey the decision to return the block 100% to Malabu in accordance with the terms of settlement.

The Economic and Financial Crimes Commission (EFCC) brought back Malabu case in 2017, seeking a court order to return OPL 245 to the federal government — an order which was granted by the federal high court, Abuja in January.

But Shell and Eni challenged the ruling and contended that the rights of parties to fair hearing was not followed before the ruling was reached. They prayed the court to reverse the order, and allow the parties address the issue legally. John Tosho, a judge, held that the ownership of the block should return to Shell and Eni.