…As govt pays N26bn to marketers for products transportation 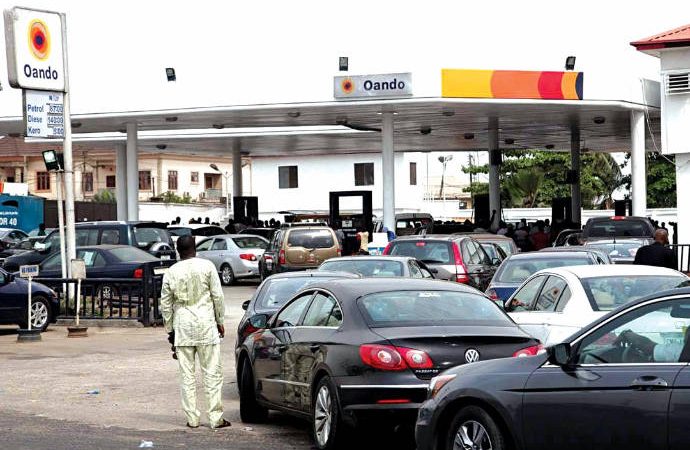 06 February 2018, Sweetcrude, Abuja – Long queues of vehicles have resurfaced at filling stations in the Federal Capital Territory, Abuja, following a widespread rumor of an impending increase in the pump price of fuel.

At many filling stations visited by our correspondent in Abuja, long, winding queues were the order of the day. At the Total filling station, adjacent to the Nigerian National Petroleum Corporation (NNPC) Headquarters in the Central Business District, the queue encircled several blocks of buildings and extended past the National Bureau of Statistics (NBS) building.

Queues were noticed in other stations in the city while black marketers went to the streets to sell their product.

The fuel shortage and instability in supply of the products started before the Christmas and New Year celebrations, amid rumours that the Federal government would soon increase the pump price of petroleum.

However, the NNPC has stridently debunked the rumor and assured Nigerians that it has no plans to increase prices both at the pump and ex-depot level.

Meanwhile, reports have emerged that the Petroleum Equalisation Fund (PEF), an agency of the federal government, has confirmed that it pays out a minimum of N26 billion annually as reimbursement to petroleum product marketers as palliative for transportation.

A source at the Fund who craved anonymity because he was not authorised to speak on the matter told a local newspaper that the agency pays out a minimum of N500 million weekly to some petroleum products marketers across the country which translate to N26 billion annually.

Although the figures according to the source may vary from time to time, the least amount paid to marketers per is week is N500 million. The source further disclosed that the agency pay over 15,000 marketers across the country weekly.

“When we make payment we deal with more than 15,000 marketers. If we are making payment, you will see that in less than 2 minutes we pay about 15,000 people across every nook and crannies of Nigeria. We pay out over N500 million every week.

“You know in Nigeria people don’t believe that you can pay N50 million without receiving anything, but in this case, you don’t even know who you are paying you are driven by the data,” the source said.

However, PEF’s spokesperson, Dr. Goody Nnaji, refused to confirm the figure to our correspondent, stressing that the agency does not disclose how much it pays to marketers due to the inherent danger in doing so.

According to him, the agency, in sometime past used to publish the payment to marketers but stopped doing so as some marketers said the action exposes them to becoming targets of armed robbers and kidnappers.

The PEF was established by Decree No. 32 of 1975 now cited as Chapter P.11 of the Laws of the Federation of Nigeria, 2004 and vested with responsibility of facilitating the sales of petroleum products at government approved prices throughout the country.

The agency implements three schemes aimed at facilitating the distribution of products under which marketers are reimbursed their cost of transportation. The schemes are Bridging, Inter-District and Equalisation scheme.

However, there are indications that the Board of PEF is worried that despite the huge sum of money paid-out by government to cushion the effect of product transportation, incidents of diversion remain a major challenge in the downstream sector of the industry.