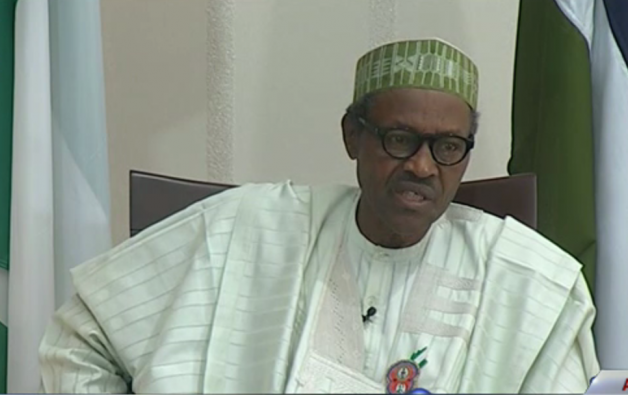 *President Muhammadu Buhari responding to a question during a media chat.

02 January 2018, Sweetcrude, Abuja – President Muhammadu Buhari has vowed to investigate as well as deal with persons who he said are responsible for the current fuel scarcity which had made the Yuletide season unbearable for many Nigerians.

Government Officials, including representatives of the Nigerian National Petroleum Corporation (NNPC), have repeatedly blamed sabotage by petrol marketers for the fuel scarcity that has ravaged the country for over three weeks.

Speaking in his New Year broadcast to Nigerians, President Buhari remarked that he was saddened by the hardship Nigerians were put through as they spent a better part of the Christmas and New Year holiday in long queues at filling stations trying to buy the scarce product.

He said, “Unfortunately, I am saddened to acknowledge that for many this Christmas and New Year holidays have been anything but merry and happy. Instead of showing love, companionship, and charity, some of our compatriots chose this period to inflict severe hardship on us all by creating unnecessary fuel scarcity across the country.

“The consequence was that not many could travel and the few who did had to pay exorbitant transport fares. This is unacceptable given that NNPC had taken measures to ensure availability at all depots. I am determined to get to the root of this collective blackmail of all Nigerians and ensure that whichever groups are behind this manipulated hardship will be prevented from doing so again.”

He added that “Some of our compatriots chose this period to inflict severe hardship on us all by creating unnecessary fuel scarcity across the country.

The product was being sold for as high as N250 per litre in many filling stations across the country instead of the official control price of N145 per litre.

According to Buhari, “Such unpatriotism will not divert the administration from the course we have set ourselves. Our government’s watchword and policy thrust is CHANGE. We must change our way of doing things or we will stagnate and be left behind in the race to lift our people out of poverty and into prosperity,” he said.

Mr. Buhari also a spent the better part of his speech describing his administration’s plan to build rail and road networks across the country. He explained that the improved road and rail network will help the country to “achieve global economic competitiveness as targeted under the Economic Recovery and Growth Plan.”

He said work is already on-going in the Lagos-Kano Standard Gauge Railway.

According to the president, the rail line, which is projected to reach Ibadan from Lagos at the end of 2019, will carry two million people and five million tons of cargo yearly.

Similarly, he said work will commence on the Kano–Kaduna segment of the rail line this year and will be completed by the end of 2019.